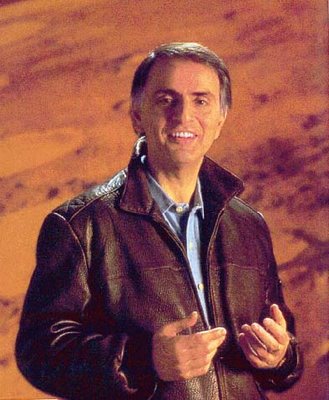 The Cosmos is all that is or ever was or ever will be. Our feeblest contemplations of the Cosmos stir us -- there is a tingling in the spine, a catch in the voice, a faint sensation, as if a distant memory, of falling from a great height. We know we are approaching the greatest of mysteries.

Carl Sagan died ten years ago today. Many famous people have died over my lifetime, but Sagan's passing is the only one that I really, truly mourned. Every single news story I read about the latest photographs from the Mars rovers or the Cassini probe makes me wish he was still here, that great popularizer of science who doggedly continued to labor in planetary astronomy when everyone said that the real interesting stuff was in the stars, not in the planets.

I was nine years old when I first encountered Sagan, as his landmark PBS miniseries Cosmos debuted. My fourth-grade teacher had a poster for it and everything. I was the "science geek" of the class, so of course I watched the show -- but so did a number of friends of mine, including one kid who lived on a farm. Being nine, we didn't understand much of what the show was about. I expected a show about space, maybe a planetarium-type of exposition on PBS, so I was confused by all the biology and history. But there was something compelling about it anyway -- Sagan's voice, for one thing, which I always found very charismatic, and the writing, which was rich in poetry.

In Cosmos, I learned for the first time of a thing called "evolution". I learned about Mars, of the likelihood of extraterrestrial life, of the nuclear threat. I learned of skepticism, and for the one kid in the class who didn't groan when the teacher said "Take your science books out", I thrilled to hear science described not as a subject but as a tool, and the "best tool we have". And as a nine-year-old, I was thrilled to learn that the word "Googol", naming the number identified by a 1 followed by one hundred zeroes, had been coined by another nine-year-old.

No, I didn't understand much of Cosmos, even though I owned a copy of the book (my parents advanced me two months' allowance to buy it).

Even today, I'm stopped on the street or on an airplace or at a party and asked, a little shyly, if I wouldn't -- just for them -- say "billions and billions".

"You know, I didn't actually say it," I tell them.

For a while, out of childish pique, I wouldn't utter or write the phrase, even when asked to. But I've gotten over that. So, for the record, here goes:

During my college years, we had a thing called May Term. This was a shortened "third semester" during which students took a single course over a four-week period. During my freshman year May Term, I took astronomy as a science elective. Alas, my professor wasn't nearly as interesting a speaker as Carl Sagan -- he had a high-pitched, nasal voice and said "ummm" a lot -- and the class was actually held in the school planetarium (a room whose existence was the school's best-kept secret). So there we were, in a dark room sitting in seats that reclined back to 45 degrees, listening to a prof with a droning, high-pitched voice. Little wonder that the friend with whom I took the class traded off with me on "snore patrol". It wasn't a bad class, though, and the lab portions, involving stargazing at night, were a lot of fun. And I spent my afternoons reading Cosmos. A year later, while taking some other course during May Term, I watched the entire Cosmos TV series on the VCR. The tiny video store up at the corner actually had them all on their rental shelves.

Some years later, after I graduated, I learned that Sagan had written something of a "sequel" to Cosmos. I bought Pale Blue Dot the second I saw it in the bookstore, and read it almost immediately. A few years after that, I bought The Demon-haunted World: Science as a Candle in the Dark, and read it almost immediately. I remember seeing Sagan on Nightline, in which he reacted to something that was in the news from the world of astronomy, and in which he noted that he'd come through his recent illness fairly well, and that he hoped that a new period of increased funding for basic scientific research was in the offing.

Some time after that -- I don't recall how much -- my mother told me that Carl Sagan had died.

I don't know to what extent ignorance of science and mathematics contributed to the decline of ancient Athens, but I know that the consequences of scientific illiteracy are far more dangerous in our time than in any that has come before.

Obviously I never went into a life of science. I studied music and philosophy, on my way to working in restaurant management, a brief stop in sales, and finally retail maintenance (whilst always writing). Carl Sagan's influence in my life is one of attitude: skepticism coupled with enormous wonder, and the certainty that science is absolutely essential to understanding the universe and our place within it. From Carl Sagan I learned that the Universe -- the Cosmos -- is a place of wonder and beauty and amazement. I think of his work often, when I look on the stars or read about the planets. When I read Kim Stanley Robinson's Mars trilogy, I detected Sagan's influence there as well. As Sagan wrote in Cosmos:

The power of [Percival] Lowell's idea may, just possibly, make it a kind of premonition. His canal network was built by Martians. Even this may be an accurate prophecy: If the planet is ever terraformed, it will be done by human beings whose permanent residence and planetary affiliation is Mars. The Martians will be us.

Earlier in that same chapter, Sagan relates the sad story of a friend of his, a scientist named Wolf Vishniac, who developed an experiment for the Viking lander that would test for the presence of microbes in the Martian soil. Vishniac's experiment was eliminated in a cost-cutting gesture, and then Vishniac himself died while on a scientific expedition to Antarctica. Later, Robinson featured the Martian crater named for Vishniac in his epic trilogy.

Perhaps one day our descendants will stand beside the waters of a Lake Sagan on a planet in some other star system, and perhaps they'll wonder about the writer whose every word glowed with the hope that one day we'd be out there, if we survived our technological adolescence. I hope so, too. 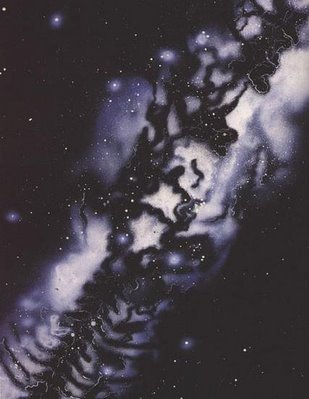 If you wish to make an apple pie from scratch, you must first invent the universe. 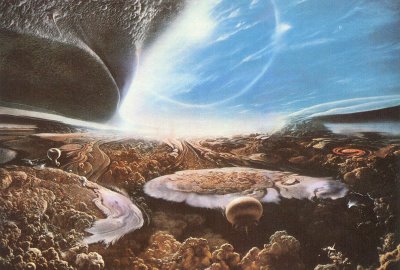 We have heard so far the voice of life on one small world only. But we have at last begun to listen for other voices in the cosmic fugue. 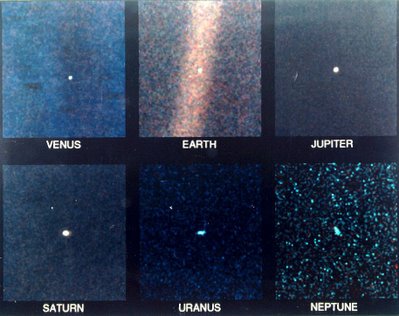 Look again at that dot. That's here. That's home. That's us. On it everyone you love, everyone you know, everyone you ever heard of, every human being who ever was, lived out their lives. The aggregate of our joy and suffering, thousands of confident religions, ideologies, and economic doctrines, every hunter and forager, every hero and coward, every creator and destroyer of civilization, every king and peasant, every yougn couple in love, every mother and father, hopeful child, inventor and explorer, every teacher of morals, every corrupt politician, every "superstar", every "supreme leader", every saint and sinner in the history of our species lived there -- on a mote of dust suspended in a sunbeam.

The Earth is a very small stage in a vast cosmic arena. Think of the rivers of blood spilled by all those generals and emperors so that, in glory and triumph, they could become the momentary masters of a fraction of a dot. 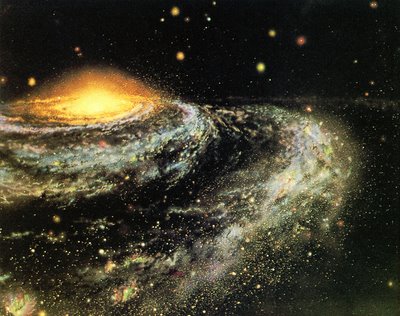 For we are the local embodiment of a Cosmos grown to self-awareness. We have begun to contemplate our origins: starstuff pondering the stars; organized assemblages of ten billion billion billion atoms considering the evolution of atoms; tracing the long journey by which, here at least, consciousness arose. Our loyalties are to the species and the planet. We speak for Earth. Our obligation to survive is owed not just to ourselves but also to that Cosmos, ancient and vast, from which we spring.

Wow. I just wrote that I liked the guy in my bloggy.

I, too, admired Sagan. He made science and astronomy interesting. Noting that Sagan was an atheist, I would be interested in a post from you on your views of spirituality and science - not to start an argument or anything, just because most people can't do it (have both).

Was it true he smoked pot.