It's time to sign off for the Holy Day, the Mass of the Christ, and so on. We're snow-free in Buffalo, believe it or not. But so what? They're snow-free in Phoenix, AZ, and yet they celebrate Christmas there, too. Stuff before I depart:

:: This is also an end of sorts for an old and trusty friend. The computer on which I have written every post thus far of this blog has been showing its age for quite some time now, and the time for replacement is at hand, with said replacement coming via the generosity of my parents, who would have to both live to the age of 189 if I was to ever completely repay the things they've given me, both tangible and not, over the years. The old computer, a HP Pavilion, made its debut in our home in late 2001, before this blog even launched. Five years later, it still works OK, although with creaks and whines on occasion. It no longer plays The Daughter's games on CD-ROM, unfortunately, and it freezes up on occasion requiring a cold boot. But I'll miss this durable machine, even as I launch the new one. Five years on one computer? Who does that? So anyway, one additional reason I've had so little time for posting lately is the preparation work for the new machine -- making backup CDs of all the data from the old computer so I can migrate all our documents and photos, downloading the latest versions of Firefox, OpenOffice, and various other programs that we use so I can load them right onto the new machine.

So, anyway, when next I post -- probably Tuesday or Wednesday, if all goes according to plan -- it'll be on the new computer.

:: We put our Christmas tree up very late this year. It went up Friday night. It would have gone up a week or two previous, but at one point in mid-December The Wife and The Daughter both suffered colds that made anything more ambitious than ladeling soup down their throats unpalatable. Both mended just fine, though.

As for the tree, I'll put some photos of it up at some point (maybe), but remember that last year I posted some photos of our most beloved Christmas ornaments, here, here and here.

:: Shamus's DM of the Rings comic takes a strange turn.

:: ABC had The Sound of Music on last night, and The Daughter insisted on watching the first hour or so, which was fine by me, even though I can't imagine why networks will show their own series in Widescreen formats but not a friggin' movie. Nope, we got pan-and-scan Sound of Music, which always disappoints.

By the way, from watching this movie, I always thought that the word for "a girl who's just entered the convent" is "postulate", which I found baffling since in a geometry and logic context, "postulate" means something completely different. Then a few weeks ago I'm reading a newspaper article about the declining number of nuns in the Catholic Church, and I discovered that I've been mis-hearing the word "postulant" all these years.

:: Our Christmas dinner this year will be a pork tenderloin (not sure how we'll season it), scalloped corn, an acorn squash (I'm slowly coming to accept the squash as something that doesn't taste bad), crescent rolls, and biscuits. In case anyone was wondering.

:: Finally, here's a poem I offered last year at this time. It's one of my favorite works of Christmas literature.

A frosty Christmas Eve when the stars were shining
Fared I forth alone where westward falls the hill,
And from many a village in the water’d valley
Distant music reach’d me peals of bells aringing:
The constellated sounds ran sprinkling on earth’s floor
As the dark vault above with stars was spangled o’er.
Then sped my thoughts to keep that first Christmas of all
When the shepherds watching by their folds ere the dawn
Heard music in the fields and marvelling could not tell
Whether it were angels or the bright stars singing.
Now blessed be the towers that crown England so fair
That stand up strong in prayer unto God for our souls
Blessed be their founders (said I) an’ our country folk
Who are ringing for Christ in the belfries tonight
With arms lifted to clutch the rattling ropes that race
Into the dark above and the mad romping din.
But to me heard afar it was starry music
Angels’ song, comforting as the comfort of Christ
When he spake tenderley to his sorrowful flock:
The old words came to me by the riches of time
Mellow’d and transfigured as I stood on the hill
Heark’ning in the aspect of th’ eternal silence. 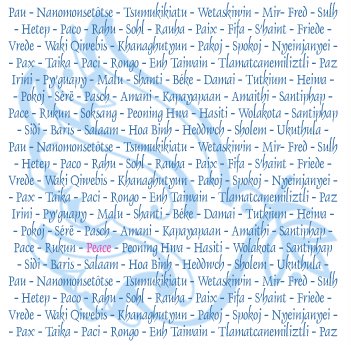 May you all know peace and love on this Christmas Day, and all the days to come.

Merry Christmas and Happy New Year to all three of you.

BTW-Acorn Squash rocks with butter, salt and the lightest sprinkle of cinnamon and ginger.

Reading about you changing machines made me wax nostalgic about my very first computer. A TANDY TRS 80 with tape drive.

This was back in the day of Commodores and Apple II.

Since then other machines have come and gone. Right now my primary tool is a Dell Inspiron 9200.

I'm THINKING I may get a big-boy desktop for every-day use and keep the laptop in reserve for travel...I'll wait till the new Microsoft OS --VISTA -- comes out and see if that's enough to push me over the edge into another binge of blatant consumerism.

The good angel on one shoulder keeps telling me to live simply. The hedonistic, self-indulgent fat angel on the other shoulder says gimme toys! gimme toys!

Sadly, it's already a forgone conclusion who is likely to win that argument.