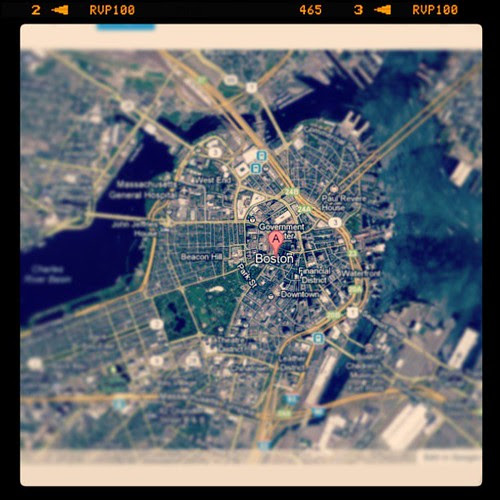 I dearly love this city...honeymooned here...and it will always be Boston! #Boston #BostonForever, originally uploaded by Jaquandor.

Even though I haven't been there in 16 years, I have a lot of fine memories of Boston.

Honeymooning there with my new Wife (still my current Wife). Shopping at Quincy Market, the Science Museum, the New England Aquarium. Boston Common. Seafood. Traditional dim sum in Chinatown (meaning, the kind of dim sum place where they wheel around the food on carts).

:: I remember construction everywhere when we were there. It was the Big Dig, as they called it. What a mess.

I remember walking into a store and having a clerk say, "How are you, ladies?" We had our back to her, and she saw two long-haired folks. (The Wife had long hair then.)

I also went there as a kid several summers in a row, from 1982 to 1985 or so, because my father had annual computer courses he took...someplace. I remember doing a lot of hoofing around downtown Boston with my mother and sister. We tracked down Paul Revere's grave, and later that same day, his house (with the help of the single nicest cop I've ever met). I remember Old North Church, and walking from the Science Museum to the USS Constitution. On that particular walk, we went past a brownstone on the doorstep of which was the first passed-out drunk I ever saw, the empty bottle on the ground just out of reach of his fingertips. I always wondered if he drained it, or if it ran out where it fell as he collapsed.

I remember clam chowder...at McDonald's. I remember falling in love with public transportation in general and trains in particular. I remember the paddleboats, Faneuil Hall, and a restaurant called the Magic Pan.

Boston is a great city -- it was today before the bombings, and it is today after them.

I just wanted to say that.

Email ThisBlogThis!Share to TwitterShare to FacebookShare to Pinterest
Labels: Events of the Day, Photo Posts

Boston is where I won $17,600 on JEOPARDY! The UU mother church is there, and even though I'm not sa UU, that was special.
It was also where I had a most unfortunate incident in 1991 (but more on that in the future).
I do love the city, and watching the news IS useless.

I've visited Boston twice from the UK. The Market was a great memory. All good! And here we have another hateful act carried out by hateful people. Shame on them!

I've visited Boston twice from the UK. Loved the Market. Great people. All good. And yet again - a hateful act by hateful people. Shame on them.