A to Z: Ligeti

(First of all, I have updated last night's placeholder of a post for K with more informative content!)

I'm not all about Romanticism and what's traditionally taken for 'beauty' in music. I am also fascinated by a lot of what has transpired in classical music since the early-20th century breakdown in tonality. I'm talking about music that explores the very boundaries of what can even be considered structured, formal music in the first place; music that eschews standard concepts of melody and harmony. Thus, the music of today's composer, the modern Hungarian master Gyorgi Ligeti.

Like many people, I first heard Ligeti's music in the context of the film 2001: A Space Odyssey, in which Stanley Kubrick used carefully-chosen classical works to score his film in amazing ways.

(ASIDE: As amazing and great as the results of Kubrick's music selections for 2001 are, the processes by which Kubrick attained those results were...well, let's just say it outright. He was a dick. First, he actually brought in composer Alex North -- one of the great film composers, who wrote the magnificent score to Spartacus, for example -- to composer an original score for the movie. But then Kubrick decided to abandon North's work in favor of his 'selections from classical music' notion. Now, rejected scores are not at all unheard of in the film music world, but generally speaking, composers are told when their work is being replaced. Not so Alex North; he had no idea his music has been dumped until he saw the movie in release. And in the case of Ligeti, Kubrick used the music without getting full permission, which prompted Ligeti to sue for copyright infringement.

Oddly, in my years of participating in various film music forums online, I would often come across people who genuinely believe that the resulting film would have been better with North's score instead of Kubrick's now-iconic classical selections. This utterly baffles me, but film music fans are a baffling bunch.)

The piece below, Atmospheres, has no melody, no theme, and no rhythm, either. It is simply a series of sonic masses that shift and slide into one another, almost like a cacophonous sonic kaleidoscope. A look at a page from the score shows what Ligeti is up to: 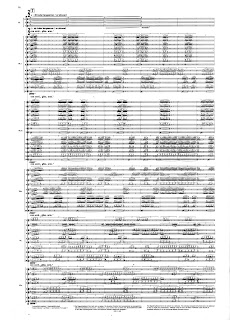 The notation at the bottom of the page makes things clear: No melodic line is to come through. There is to be no hint, no intimation no matter how brief, of any melody at all in this work. As this recent article makes clear, performing this work has its own difficulties, for how do you conduct a work with no melodies, rhythms, or any of the usual things which mark the passage of musical time?

What this sort of music looks like on paper is no less peculiar. Where other composers evoke such complexity by offering only vague instructions to their performers, Ligeti took the opposite approach, writing out separate, detailed parts for each member of a large orchestra.

The result? Page after page of musical notation so dense, no human conductor -- not even music director laureate Christoph von Dohnanyi, who'll present the work here next month -- can truly process it all in the act of performance.

"The conductor can only shape it," Fitch said. "There's no way to cue every single person . . .

"In the end, it should sound like a placid surface with tremendous activity going on underneath."

And yet, for all that, I don't find Atmospheres hard to listen to. As music, it's like being in the midst of a crowd of people and just attending to the sounds they make; at times it can get to the point where you know that conversations are taking place, but you can't even pick out a single word, so thoroughly do all the voices blend together. The music sounds, at first, like some kind of stereotypical 'scary mood music', but I find that the longer I listen to this work, the farther I get into it, the less I perceive a sensation of fear at all. Ultimately I don't think I can ascribe a particular mood to this work at all: it just is.


On Monday: You know, I have no idea. There are a lot of M composers to choose from!

scrawled here by Kelly Sedinger at 11:48 AM

I accidentally listened to this on YouTube. My favorite comment, which made me LOL: "I've been practicing this on the banjo."