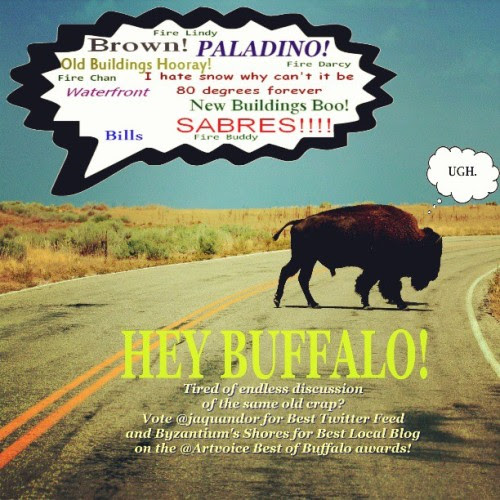 It's time for the annual popularity contest that Artvoice, Buffalo's local alt-weekly, runs. As usual, "Best Blogger" is one of the categories, and as usual, I assume that this blog has less than zero chance of winning. Alas!

Although I am interested a little in this phenomenon. 'Best Blog' contests always seem to focus on blogs that deal with one particular category, and in the case of the Artvoice awards, it's pretty much always gone to one of two local blogs or bloggers. One is a local blog for Buffalo-related stuff, and the other is a guy who writes about that kind of thing and also politics in general. A recent podcast by another sometime-blogger who pretty much only writes about politics listed some favorites, and they broke out pretty much the same way: a couple of general blogs about Buffalo-related stuff, a Buffalo-centric food blog or two, and a local Buffalo sports blog. (I am not snarking about the latter two fellows mentioned. Both are local favorites of mine, both for many reasons. The first is not a blog I frequent much because in all honesty, it tends to be about stuff that I don't much care about...and these days I think it's more of a 'group blog' anyway.)

Personal blogs tend to never, ever get noticed, except by (a) the people who happen to find them somehow and (b) other folks who come along if the person running the personal blog somehow manages to achieve notoriety or fame in some way. It seems that the only real way to have a blog gain any traction whatsoever is to run a blog focused on a single topic with only occasional forays into personal stuff. This is not a new development, in any way; in fact, it's pretty much been that way for about as long as I can remember, all the way back to 2002, when blogs first started to gain notoriety. But which ones gained notoriety? The personal ones? Did news outlets start noticing the explosion of people maintaining online journals, diaries, and records of their reading? No...they started noticing the political blogs. At the time it was mainly the conservative-leaning 'Warblogs', and their liberal opposition that got noticed. And that was it.

As time has gone on, blogging seems to have really settled into similar categorization. Fashion blogs, political blogs, food blogs, book blogs, comics blogs, sci-fi fandom blogs, movie blogs, and so on. Personal blogs just seem to generally slide, for the most part, under the radar. Some get more traffic than others, obviously, but in general, when it comes to 'Best Of' time, personal blogs need not apply. Why is this? Why does the conversation online so tend to shake itself out according to interest? This has always struck me as really odd, and it's one reason I gravitated toward blogging and away from newsgroup posting in the first place.

In the Usenet world, all discussion is organized by category, and there was rarely any crossover at all from one group to another. Thus you would see a certain group of people on rec.music.movies, and never encounter any of those folks on rec.arts.sf.written (the group for F&SF literature). And ditto those two groups and, say, rec.arts.books (for bookish discussions of ALL genres). Want to talk movies in general? Rec.movies was there, and various smaller groups in that domain. I once had a Usenet friend tell me that I should come over and participate in a group that was devoted to discussion of a particular teevee show, because he felt that my style of writing and my sense of humor would be appreciated there. I didn't go, however, because I didn't watch that teevee show!

As I've noted quite a few times in the past, I've been blogging for over eleven years, pretty much continuously except for a three-month stretch in 2008 when I got tired of the gig, for a time. I started in the hope of finally breaking through a sort of ghettoization of discussion...but that ultimately hasn't happened. Instead everything is still just as ghettoized as ever.

Additionally, I think there's a degree to which people like that. They like having separate places to discuss politics, sports, movies, and food. And I think that, for all the kvetching about how coarse our national dialogue is, people prefer that coarseness, because where people primarily go and rely upon as resources tend to be exactly the types of blogs where you get contentious discussion, vigorous disagreement, and generally, lots of argument. Which means that, sadly enough, the personal blogs out here in Blogland for the most part just keep trucking along. It's probably because this blog is so generally unfocused that it doesn't get any more traffic now than it ever has, and probably won't unless and until I manage to get a book into print.

For the most part, I'm fine with that. But it would be nice if, once in a while, the world admitted the existence of places online where the 'same old thing' isn't being discussed; where we're not rehashing the latest and greatest plan for the Bills and Sabres to stop sucking, where we're not arguing over where the best fish fry is, whether or not the latest old and crumbling building on the chopping block should be demolished. It would be nice, but I don't think it'll happen, because all those other blogs allow people to hold up their own interests and beliefs in reflection. Personal blogs like mine generally do not.

But oh well...vote for me, anyway, Because all those other blogs suck, and because this is one of Buffalo's oldest blogs and we tend to really like old things. This blog matters!

Your blog does matter! I will vote for you! :)

By the way, I just read your comment policy. I LOVE Wheaton's Law. Does it *really* have to be more complicated than that? I think not!