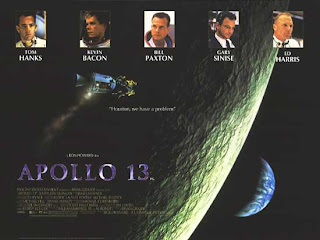 It's been way too long since I watched this movie. I love this little scene, early in the film, after the party at Jim Lovell's house has ended and the first moonwalk in history is over. Jim and his wife, Marilyn, are in the backyard.

JIM LOVELL: Yeah, I'm not used to the Champagne.

MARILYN LOVELL: Me neither. I can't deal with cleaning up. Let's sell the house.

JIM LOVELL: All right. Let's sell the house. They're back inside now, looking up at us. Ain't that something?

MARILYN LOVELL: I bet Jenny Armstrong doesn't get a wink of sleep tonight. Ah, when you were on the far side on Eight, I didn't sleep at all. I just vacuumed over and over again.

JIM LOVELL: Christopher Columbus, Charles Lindbergh and Neil Armstrong. (laughs) Neil Armstrong! From now on we'll live in the world when man has walked on the Moon. It's not a miracle. We just decided to go. Apollo 8 - we were so close. Just sixty nautical miles down and... Mmm. It was like just step out, and walk on the face of it. I wanna go back there.

It's amazing to me what we as a species are capable of when we somehow manage to get ourselves on the same page and decide, "We want to do that." The Moon's still there. Mars is there. All our planets are there. The stars are there. When are we going to decide to go?
scrawled here by Kelly Sedinger at 7:43 AM

Now that the private sector has taken over, space travel will advance at light speed

The private sector's involvement is welcome and will bring great things, but it isn't taking over. The large-scale work for which there isn't yet a compelling profit motive will still be done by governments, as has always been the case.

Apollo 13 is a movie that should not have worked. You KNOW how it ends. (Spoiler: well.) And yet it does work.