Dear baseball players of the world:

You are ruining everything!

So some dope interrupted the Murdoch family's stammering and mumbling today by "throwing a pie" at Rupert Murdoch, which actually meant waving a styrofoam plate in Murdoch's direction as some sort of foam slid off it, till Mrs. Rupert Murdoch jumped up and clobbered the "pie" guy.

Back in 1998, when Bill Gates got hit by a pie, it was variously reported to have been a "cream pie" or a "custard pie," and Gates said through a spokesperson that the pie "wasn't that tasty" — suggesting that it was, at least, an actual, edible pie.

The decline from a real pie to a lazily produced plate of foam should be familiar to baseball fans. Over the past decade, the baseball "pie" has stopped resembling a pie at all, till players are content to celebrate victories by smacking the hero of the game in the face with a towel full of shaving cream.


Even a fan of the pie-in-the-face like myself has to admit a certain amount of befuddlement over your adoption in recent years of this lovely ritual. But it's hard to find it a cool thing when what you're doing is just using a towel slathered with shaving cream. First off, shaving cream...ewwww. Second off, a towel? Really?

So, if you baseball players want me to take your slapsticky victory celebrations more seriously, stop doing this: 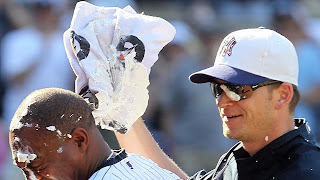 Or stop calling it pie. This is a pie:

Email ThisBlogThis!Share to TwitterShare to FacebookShare to Pinterest
Labels: Pie in the Face, Sport