You learn something every day!

Whilst on break at The Store today, we observed our coffee bar employee making a smoothie that looked particularly tasty. When we asked her what flavor it was, she told us, "Peach and raspberry. It's a Peach melba". This got us on the topic of the word "melba". What does that mean? Is there a flavor called "melba" that pairs particularly well with peach? And is this flavor any relation at all to those little slices of dried bread, called "melba toast"?

So in a moment of downtime later on, we did some Googling and found out that in the late 1800s, there was an opera singer -- a soprano -- named Dame Nellie Melba. Apparently Dame Melba had quite the career, and she was especially beloved in her native Australia, as she was that country's first international music superstar. A French chef invented four foods in her honor, including a dessert called "Peach Melba", and, believe it or not,  Melba toast (which he created for her during a time of illness, when her diet was restricted). 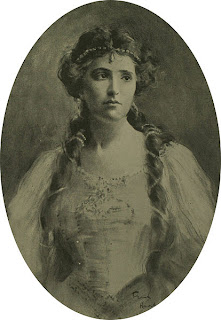 And there you have it. There really was a person named Melba, much beloved in the musical realm in her time, but whose name lives down to us today in culinary terms.
scrawled here by Kelly Sedinger at 6:05 PM

She 'invented' Melba Toast? No, she toasted bread and cut it into smaller pieces and let those dry out. It's not a unique food...it's neglect.

HEY!!! I work with a Melba but she is a FLIPPIN' IDIOT!!!! Your Melba sounds YUMMY IN MY TUMMY!!!

Thank you, Jaquandor, for this edifying epistle.