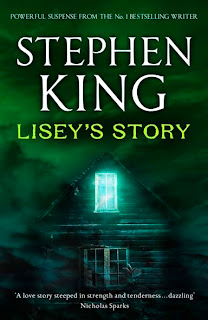 When Stephen King is on (IT), I like few writers better. And when he's off (Dreamcatcher), well...he can still be intriguing, if long-winded. And then there are the books where I'm not honestly sure if he's on or off. Into that category I find myself placing Lisey's Story.

It took me a long time to get into this book. I'm not entirely sure why that is, but I think part of it is due to King's approach in this book, which is more stream-of-conscious than previous books of his that I've read. The book is very psychological in nature, with many long and somewhat dreamy passages taking us into the mind of a woman, Lisey Landon, whose husband, Scott – a famous writer – has recently died. She is only now beginning to go through his belongings, which carry her into an exploration of his own world, which turns out to be a lot more extensive than she had ever known – to the point of actually journeying into a magical world of Scott's own mindscape.

And while Lisey is doing all of this, she is also dealing with things in the present. A college professor who thinks that she should donate all of Scott's things to his school. When she refuses, he drunkenly mouths off to a guy who turns out to be insane, violent, and ruthless. So while she is, in a real way, getting to know her dead husband now for the first time, she must also deal with a real threat to her life.

King writes all of this in a very dreamy style, which is markedly different than the style he's used in previous books of his that I've read. Now, this may be part of what is King's style nowadays, since I haven't really read any of his more recent books other than this one. It was due to this style that it took me a long time to really get emotionally involved with the book. I don't know Scott Landon either, so it's hard to relate at first to any of the specifics of Lisey's loss. Gradually, though, it becomes more and more clear what King is up to.

King's style in Lisey's Story took quite a while to get used to. King shifts between his time periods often, and he does it by splitting his chapters in mid-sentence. Plus, there's the whole matter of the stream-of-consciousness that makes the book a bit of a slog in the early going. But by the time I'd reached about one-fourth of the way through the book, it was becoming more and more clear what King was doing and the style was starting to settle into place, and as the book moved into its final act, I could really feel the momentum of all of King's story threads all starting to move toward their conclusions.

Lisey's Story is not the most engrossing King novel I've ever read, but it is a fine novel nonetheless.