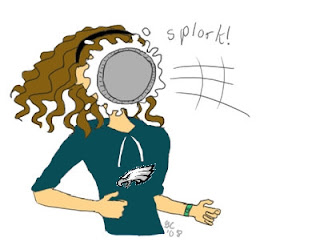 Wow, the Eagles appear to be a slowly-evolving train wreck. After this loss, they're 1-4, which is rather shocking considering the free-agent money they slathered around during the offseason. It appeared at the time that they were looking to buy themselves a Super Bowl championship; now they're in a desperate spot where they almost need to win out to have a shot at the playoffs. Wow. What a disaster.

And thing is, they don't look bad. The Eagles -- whom I've always rather liked, despite the presence of Michael Vick, who has a long way to go before I remotely consider forgiveness for his dog-fight ring -- make a lot of big plays, and they do a lot of great things on the field. Problem is, they tend to make ridiculously huge mistakes. It's really something to behold. I've never seen a team so bound-and-determined to shoot itself in the foot as this one.

The best example came at the very end of the game, when the Bills were clinging to a seven point lead. They faced fourth-and-one just past midfield, and they lined up as if they were going to go for it. This, however, was an old ploy, which I've never seen work. The offense lines up and everyone stays as still as a frozen rock as the quarterback goes through a hard snap count. The hope is that somebody on the defensive line will be stupid and jump before a snap of the ball happens, thus committing an off-sides penalty and giving the offensive team a free first down. This was what the Bills were doing. The color commentator on teevee actually said that's what the Bills were doing. It was so obvious. Everybody watching the game, either in person or on teevee, knew that this was what the Bills were doing. I've seen this tactic many, many times in my years of watching football, and I've never once seen it work.

Until today. One of the Eagles jumped, refs threw the flag, Bills got a first down, and they ran out the clock. Game over. Wow. The replays showed Philly coach Andy Reid's head nearly exploding when he saw his guy jump. But ultimately, it's his fault, isn't it? The Eagles are very talented...but they appear to have almost no discipline. And it's killing them.

(BTW, everyone on teevee was harping on Vick's four interceptions. That's bad, but as I saw it, two of those weren't even his fault -- they were balls his receiver was able to get hands on, but the ball ended up being bobbled about and deflected into the hands of Bills defenders. I don't have any idea how to change this, but it's always struck me as mildly unfair that those kinds of picks get charged against the quarterback's stats. I know how the NFL officially scores it, but as far as I'm concerned, Vick had two picks, not four. And two of his receivers had "Contact-ball Interceptions". Or whatever you want to call it.)

As for the Bills, they are 4-1, huzzah! They're shaping up as a team that needs to score lots of points, though, because the defense can't stop anybody. Maybe that will change a bit. I hope so, anyway -- but at least for today, there were a lot of big plays made by young members of the Bills' D, so maybe those guys grow and become more consistent at making plays. Alex Carrington, Kelvin Sheppard, and Reggie Corner all made big plays today -- or they made something happen that allowed George Wilson to make one of his several big plays. Quite a game, although I would like to see the defense overall become better at forcing punts.

Oh, and I'm sure he won't stay in the doghouse for too long, but linebacker Danny Batten made the most blatant leading-with-the-helmet hit on Michael Vick that I've ever seen. That one was so cut-and-dried that nobody with a pulse could possibly deny it. If not for the Eagles' defensive lineman who jumped later on and cemented the victory for the Bills, Batten's hit would have been the dumbest penalty of the day. It may well be the single stupidest penalty I've ever seen any Bills player commit, ever. And I remember Andre Reed's throwing of his helmet in Super Bowl XXVI.

What else to say? Hmmmm...Fred Jackson continues to run like a man possessed, a fact which the Bills would have done well to remember on one drive early in the fourth quarter, when their lead had fallen to ten points and they really needed to move the chains or, failing that, at least grind a bit of clock. Instead they threw three incompletions, going three-and-out and running insignificant time off. Ugh! And one of my Facebook friends pointed out that the Bills often seem to end halves of games with at least one timeout left. That speaks to much better discipline under Chan Gailey than the Bills had under their previous coaching regimes.

Next week, the Bills are on the road to play the Giants. Then they have their bye week. Go Bills!

A couple other random football notes:

::  I thought that the Jets were guaranteed to be awesome? Because they aren't.

::  I hate having to do this, but I now must root for the Dolphins. I do not want them ending up with the top pick in the NFL Draft. I've had to put up with being in the same division as Tom Brady for ten-plus years; just as his career is starting to enter its twilight, I do not want to have to start putting up with Andrew Luck for a similar period. So come on, Chiefs, Colts, or Vikings! Win the Draw of the Luck!

::  But how sick would it be if the Colts get him, and go from the Peyton Manning era to the Andrew Luck era? Aieee!!!

OK, that's about it. What a fun football season thus far!