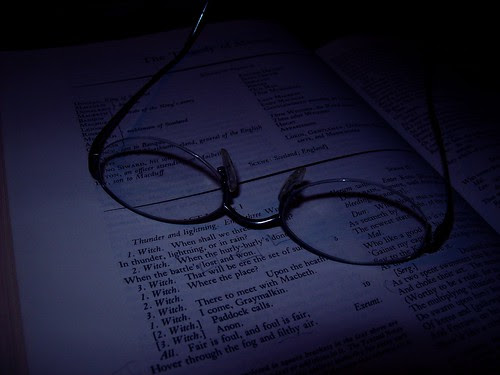 I'd love to be able to say that I loved Shakespeare right from the first time I read him, but I can't. Sorry, but I was a typical ninth-grade kid, and I thought that Shakespeare sucked. Despite my teacher's desperate attempts to force us to see the beauty in Shakespeare's poetry and drama, I saw none of it. All I saw was a guy who used twenty words when six would do, a guy who insisted on repeatedly stopping the action so someone could stop and babble at the audience, and a guy whose stage directions consisted of things like "They fight" and "Exeunt". Yeah, I hated the experience of reading Shakespeare.

In ninth grade, the play was Romeo and Juliet. Hated it. (At the time.) In tenth grade, our Shakespeare of the Year was Julius Caesar, which was, I had to grant, a bit more interesting than Romeo, because it had nifty political stuff and brutal murders and whatnot. And then, in eleventh grade, there was Macbeth. I suppose the third time was the charm, because this time, I thought, Wow, this is pretty awesome.

It wasn't just the fantastic elements of the story, although yes, that did help. But I think that by this point, I was getting to the point as a reader where I could understand a lot more readily what Shakespeare was doing. I didn't have to have the teacher explain just what Lady Macbeth was doing when she said "Out, damned spot! Out, I say!" I didn't have to have it explained to me what Macbeth's "Tomorrow and tomorrow and tomorrow" speech. I thrilled to the way the witches' prophecies were fulfilled. I did have to have some stuff explained, but a lot of it was falling into place.

The next year we would read Hamlet and The Tempest. I've read more since then. Not all of it, but...someday.

I read Macbeth in the 12th grade. The whole class had great fun with it. We incorporated lines from it into our slang. "It is a tale told by an idiot," was a favorite.

I've always loved Shakespeare, although my hands down favorite is Othello. The class I enjoyed the most in college was the Shakespeare class I took.