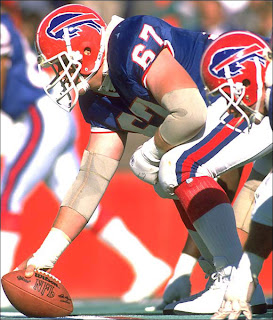 Kent Hull, who played center for the Buffalo Bills from 1986 to 1996, died yesterday. He was only 50 years old. The first indications of a cause of death that I saw cited a heart attack, the coroner's report blames intestinal bleeding.

As a member of the offensive line, Hull was not one of the "glory" players for the Bills during his time on the team. That's the nature of the position. If you're only a casual football fan, centers are part of that group of guys on each team whom you know are there and have a job to do but whose names aren't terribly important, because they're rarely the ones handling the ball, running it or catching it or scoring with it. But for football fans who know something about the game, they are incredibly important, and fans of any team can as readily discuss the performance of individual offensive linemen as that of the quarterback.

And Kent Hull was one of the greats.

It is no coincidence at all that Hull's time in Buffalo was also the Bills' heyday as a franchise. While he played, the Bills made the playoffs eight times, won the AFC East seven times, and made the Super Bowl four times. That kind of success is impossible in the NFL if you don't have a great offensive line...and the Bills did. Kent Hull was its leader, and not only that, he was one of the main leaders of the entire team.

I never met Kent Hull, but he was part of a football team that meant a great deal to me. The Bills' era of greatness mainly coincided with my four years of college, at Wartburg, in Iowa. I was 800 miles away from home, and even though I had a lot of great friends -- many of whom are still friends of mine to this day, and one of whom is now married to me -- I would still get homesick from time to time. The Buffalo Bills were my main touchstone from home during those years. Being that far away, I was, of course, nowhere near the Bills' broadcasting region, so I didn't get to see many of their games at all. In Iowa at the time, the teams I could always count on seeing on teevee were the Bears and Vikings from the NFC, and the Chiefs from the AFC (hence the fact that I've always rather liked the Chiefs since then). Bills games tended to only be on if they were nationally televised, or if the Chiefs weren't on, or if the Bills were on Monday night. (And of course, the playoffs.)

So I didn't get to see the Bills all that often. But when I did, I was watching home. Those were my hometown fans there, on the teevee. I've driven by that stadium more times than I can remember. I was going to college in a place where very few folks knew where in New York Buffalo even was; more than a few thought it was one of the five boroughs of NYC, or that it was just up the road, maybe where Yonkers actually resides. (Folks who worry about Buffalo's national reputation might consider the possibility that Buffalo doesn't even have a national reputation, as "snow capital of the world" or anything else. In my experience, Buffalo's a place that people have heard of, and...that's about it.) But several times a year, I got to see my team, my hometown team, play some of the best football that anybody was playing at the time. And Kent Hull was a part of that. You can be damned sure I knew who my team's center was, even if his name was never said on teevee.

As to that: there's a saying about offensive linemen that you know they're doing a good job if you don't hear their name mentioned by the teevee guys. That's pretty much true. Commentators almost never point out good blocking when it happens; they only mention the offensive lineman by name when they want to indicate which guy just missed a block, causing a sack or a tackle for a loss or whatever. Kent Hull's was not a name you heard much at all when you watched Bills games. And I think he'd be proud of that.

Thanks for the memories, #67. You're still missed, in many ways.

I get that same feeling when I watch the current Bills team from out here, 3000 miles away. Makes me homesick. In a good way, though.