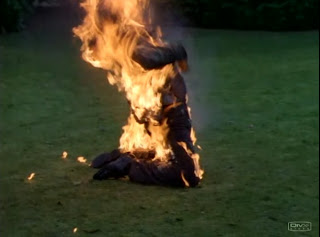 Scully: "I forgot what it's like to spend a day in court."
Mulder: "That's one of the luxuries to hunting down aliens and genetic mutants. You rarely get to press charges."

After taking a bit of a break from The X-Files during the summer and first part of the fall, but now it's time to get back in the swing of things here. We're still in Season One, when the show is finding its way.

"Fire" is another episode that I'm seeing for the first time via this rewatch, and I have to say – it's a terrific episode. Written by Chris Carter, this one has a lot going for it: a strong story, a compelling and eerie villain, and some more of Mulder's backstory with some good character moments.

Our story opens in England, where a government guy is leaving for work. He lifts his arm to wave goodbye to the wife and kids, and sees that his arm is on fire. As his family looks on in terror, the flames consume him right there in his front yard. One person, however, is not looking on in terror: a groundskeeper is looking on in what can only be described as amusement.

Cut to Washington, where Mulder and Scully are completing a court appearance when Mulder gets a message from Phoebe Greene, a woman he worked with during his Oxford days. It quickly becomes clear that this woman was more than a friend, and that she and Mulder enjoyed a relationship that left Mulder with some serious emotional scars. She is in the US to ask for his help in protecting another aristocratic British family that is coming to the US to try and evade the fire-killer, who has the habit of mailing love letters to the wives of his victims.

Being The X-Files, of course, the fire-killer comes along for the ride, deviously working himself into this family's lives as a live-in handyman on the property they rent. Meanwhile, Mulder and Scully work with Phoebe Greene to figure out just who the killer is, in hopes of stopping him. Hampering their case are Mulder's antipathy toward Greene, and the fact that he is deeply phobic about fire.

"Fire" is very effectively done, with a compellingly scary villain and the "race against time" factor in the story's unfolding. The episode also boasts some terrific special effects work through the use of flame and fire, although some of this does remind me somewhat of the effects in the movie Backdraft, which had come out a few years earlier. This episode is a well-done thriller.