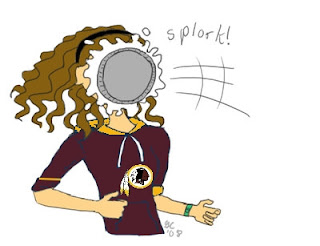 The Buffalo Bills returned to the field today, for their annual regular season game in Toronto. Their opponent was the Washington Redskins. General reaction to the games in Toronto has ranged from "Well, OK, if it helps the team make enough money to stay here" -- at best -- to "This is a giant bowl of suck", at worst. This was the Bills' fourth appearance in Toronto in the regular season, and they went into today's game looking for their first win up there.

Toronto, being an enormous city, is not really seen as embracing the Bills, and the crowds at the Rogers Centre (the stadium originally known as Skydome) are usually either really quiet or they've openly rooted for the other team. There's been a lot of comment on why this may be, but after hearing today's crowd actually being fairly loud as the game went on, I'm wondering if the most important factor in the Canadian crowd not really warming to the Bills was that the Bills in those games were dull, boring, and crappy teams. I know that I don't do a lot of cheering for crappy teams.

But today the Bills were pretty dominant, and the score frankly could have been even more lopsided than the final 23-0. The offense sputtered at times, but for the most part looked pretty good; Fred Jackson, as usual, showed up playing as though somebody had said something mean about his mother. Ryan Fitzpatrick -- fresh off a big contract extension -- was his usual self: mostly accurate with a couple of bad throws. The offensive line, which is banged up right now with one starter out and his backup out, generally provided excellent blocking.

The real story today, though, was the defense, which has been giving up lots of points and yards, and which hasn't been generating any pass rush. Until today, when they sacked Washington quarterback John Beck nine times, and handed Washington coach Mike Shanahan the first shutout of his entire NFL career. I've never been a big fan of Shanahan's; I think that a lot of his reputation rests upon his first two seasons with the Broncos, when he won the Super Bowl both years, with a pretty good defense, a Hall-of-Fame quarterback in John Elway, and a running back in Terrell Davis whom I think was on his own way to being one of the greatest running backs of all time until his career ended due to injury a couple of years later.

So the Bills are now 5-2, heading into a big match-up with the Jets next week. Go Bills!

A few other football notes:

::  The Steelers knocked off the Patriots. Any time the Pats lose is a good day.

::  The Dolphins are making me increasingly nervous. Come on, Fins! Get some victories, and lose out on the Draw of the Luck!

::  I hate to go all Gregg Easterbrook, but the Football Gods certainly seem to have exacted penance from the Saints for their 62-point game against the Colts last week by having them lose to the lowly Rams. (Who are now behind the Dolphins for the Draw of the Luck.)

::  I find Tim Tebow's constant public praying obnoxious. I just do. Sue me.

didn't see the Bills, but did see part of the Steelers' game. I was happy. puts Bills in 1st place with the tiebreaker in their favor.