These are good, upstanding, patriotic American citizens who are standing against what they see as decades of freedom-crushing excess, who are only fueled by their patriotic fervor and their keen knowledge of history and policy, whose every gathering -- no matter how sparsely attended -- warrants huge and fawning and reverent news coverage, whose formation is the most important development in American politics since the Revolution itself (no matter how much their basic arguments sound like Republican-as-usual-but-this-time-with-a-tricorn-hat), and whose motives cannot be questioned or mocked in any way. 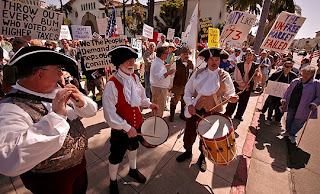 These, on the other hand, are dirty, smelly, anti-American hippies who don't know shit about anything and who really ought to just shut up and go get a job and work hard because, as we all know, one's standing in life is always and invariably a reflection of how hard one works, and who really gives a crap if thousands of them gather to protest anything at all, am I right?! 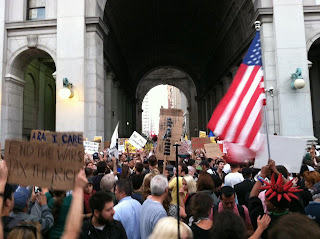 Thanks for setting this straight, news media of America! I look forward to continued extensive coverage of the trial of Michael Jackson's doctor and whether or not the latest Republican Desperate Flavor of the Month is going to run for President or not and whatever it is that Sarah Palin had to say on this particular day.