::  The Twelve Coolest Libraries in the World.

::  This has been making the rounds of Tumblr and Facebook for a few weeks now. It's something that employees of one of the nation's recently-closed Borders stores put up to get some stuff off their chests: 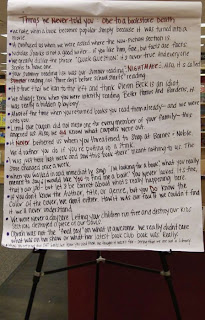 I'm really not unsympathetic to some of this kind of thing. Everybody who works in any kind of position where customer service is involved will have equivalent stories, and we all often yearn to let loose and say some of these things. Some of us actually do slip up on occasion, which then earns us an invitation to a manager's office for a conversation that can go in many directions, depending on the severity of what was said.

But still...I dunno. It's funny, but there is zero chance that any customer whose behavior would get them on this list will ever see it, and if they did, there is zero further chance that they'll recognize their own behavior as listed here. Ultimately this seems a bit petty to me.

I'm afraid I'm not very sympathetic to the whining list of annoyances. You're in customer service at a big chain store. Just because it's a book store doesn't mean that the customers are going to be more erudite just to convenience you. It comes across as very elitist and "holier-then-thou"

It does, but then, a lot of this kind of thing wears on one's nerves quickly when it's encountered on a near-daily basis, as it is in most retail settings. I'm sympathetic to the frustration and I understand from where it comes. The expression, however...meh.