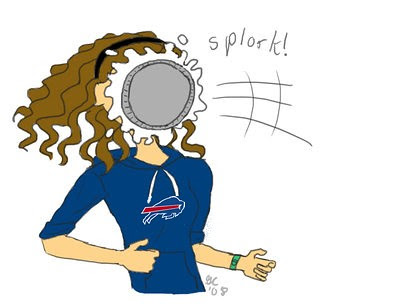 What's pretty cool this year is that, even with the Bills having lost two of their last three, both losses were by three points, and both games felt like what they were: games the Bills most certainly could have won. Even close losses in recent years were "ho hum" affairs. The Bills' two losses thus far have still been entertaining, fun games to watch.

But yeesh, without a few goof-ups, they very likely win this one!

Drayon Florence got flagged for pass interference three times, two of which within minutes of each other in the fourth quarter. That sucked. What also sucked were Ryan Fitzpatrick's two interceptions, both of which came on maddeningly underthrown passes to Stevie Johnson. He had to put the passes over Stevie's shoulder, but instead he didn't put enough on either pass, and two drives died near the goal line. Ugh!

The defense got shredded for...oh, a lot of yards. That's been happening a lot, and this time they didn't compensate for that with any takeaways. I'm not really worried about the defense, though. The winning is fun and very welcome -- the more a young team wins, the better, because it helps breed that "winning culture" that's so important -- but this year is, for me, mainly about developing a lot of young players. Yes, they're giving up a lot of yards, but I get more of a sense of potential in this team than in any Bills team of recently dolorous years.

Let's see, what else? Phil Simms is a terrible color commentator. He just drove me crazy, constantly saying things like "They need to run here!" and then say, "Oh, I'm wrong", when the pass instead. At one point he called linebacker Arthur Moats "Eric". Early in the game, he whined a little about how he doesn't know the names of any of the Bills, but later on, he held forth in expert fashion about the recent history of the Buffalo Bills. Which is it, Phil?

And that's about it. I didn't watch any football other than the Bills game this week, so that's about it. Next week, our lovely football fan gets a break from being pied as the Bills are on their bye week. After that, they go to Toronto to take on the mighty Redskins. Last time the Bills played Rex Grossman, they got shredded in Chicago during the Bears' Super Bowl season. I have a feeling things will be a bit different this time!

I actually watched NE v Dallas. as much as I dislike the Pats, I hate the Cowboys more.