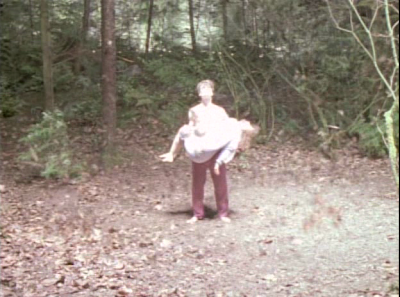 So I've decided to embark on something of a long-term project here: rewatching The X-Files. I'd like to rewatch the entire series, start to finish, series pilot to final episode of Season Nine, with the first movie (Fight the Future) thrown in between Seasons Five and Six, and culminating in the movie from a couple of years ago (which I still haven't seen). Obviously this will take a while, and while I'm not going to try to do this on a weekly basis, I'm hoping for at least two or three of these a month. Maybe more, when I watch them in clusters, as may well happen.

Why? Well, why not? Among the blogs I follow which focus on F/SF/H stuff, rewatches of movies and teevee series and re-reads of books and book series are always in vogue, and right now, nobody that I follow is doing an X-Files rewatch, which gives me a niche. This also gives me a longterm source of content (always nice), and it gives me an excuse to revisit a show that was once beloved to me.

Don't get me wrong, there: as far as I know, I still love The X-Files. The show was an iron-clad, "can't miss it" event at Casa Jaquandor for most of its run. But with relatively few exceptions, I only saw the episodes a single time each, upon their initial airings; and there are quite a few episodes from the first three seasons that I've never seen. I'm interested now, seventeen years after Season One, partly in how well the show has aged. We'll see!

My fandom of The X-Files was slow to blossom. I was only dimly aware of the show's existence for most of the first season. In fact, this was back when FOX was still a fairly fledgling network with only a couple of notable shows to its name (The Simpsons, Married With Children), and if I remember correctly, back then, FOX didn't even have enough shows to put together and entire weekly lineup. (In some ways, FOX still doesn't. There are no 10:00 shows on FOX.) I heard of this show that had FBI agents investigating paranormal stuff, but I didn't watch until my mother, who did watch, recommended the show to me. So I saw a couple of episodes during the first season and came away somewhat favorably impressed, but my attention wasn't grabbed enough to make me a regular viewer until somewhere in the middle of Season Three.

I'm lucky that I came along then, and not later; the show's "mytharc" was still pretty manageable at that point, and a new viewer could pick up the basics pretty quickly. I do remember, though, a special episode that aired sometime toward the end of Season Three that was basically a summation of the show to that point. I found that very helpful, and a short while later, the show's popularity led to video releases of early episodes. Of course, this was before DVD, so these video releases consisted of sets of VHS tapes with two episodes each, and only selected episodes at that – no complete seasons here, just the most important "mytharc" shows with a few of the better "monster of the week" shows thrown in. Anyway, I was hooked, and I didn't fall by the wayside until Season Nine, which struck me as rudderless, pallid, and just too-much-of-a-good-thing. We'll see what we find as we go, though.

Which brings me to the Pilot Episode. It opens with a teaser sequence, set in the Pacific Northwest, that shows a girl in her nightrobe running through a forest, until she stumbles in a clearing. Here she is met by a human-shaped figure (whose features we cannot see) who is accompanied by a brilliant light; the wind whips up, there is lots of noise, the leaves are blown in circles around them as the light brightens. Cut to twelve hours later, and the girl's body is found in the clearing by the cops, sporting two circular wounds near her backside. The chief ID's the body, noting that she went to school with his son; another cop says, "Class of 1989? It's happening again, isn't it?"

Cut to Washington, DC and the FBI Headquarters, where a beautiful young agent named Dana Scully reports to her superiors for assignment. She is to work alongside another agent, named Fox Mulder, who has been using his time to investigate cases that are outside the official FBI mainstream. These cases, called "the X-files", are the kinds of thing nobody wants anything to do with – except for Agent Mulder, who later suggests that it's only by way of his friends in Congress that he is able to do this work at all. Scully is being assigned for her scientific, skeptical approach; when she asks if she is being expected to debunk Mulder's work, her superiors manage to say Yes and No in that wonderful bureaucratic way of not saying much at all. Off Scully goes to meet Agent Mulder, who has just caught wind of this strange case brewing out in the Pacific Northwest. After some introductions, Mulder briefs Scully on the odd case and the wounds on the bodies (of which there are four), and then they're off to Oregon to do some investigating.

This really is one of the better pilot episodes to a show I've seen. In the space of about five to ten minutes, we get: an intriguing mystery for the first episode; an establishment of a supernatural/paranormal mood; the introduction of our two main characters, both to us and to each other; the establishment of certain tropes within their relationship; the tense conflict between the official FBI and Agent Mulder; and some initial conflict between Mulder and Scully. They would later come to trust each other in the implicit way of two people who are absolute soul-mates, but there is still constant tension between her skepticism and his willingness to take wild leaps in logic in order to press his case. (Oh, and in the first scene in the FBI Headquarters, there's an ominous looking fellow lurking in the background who is always fingering a lit cigarette.)

This first case of theirs also sets up so many of the tropes that would dominate the show for the entirety of its run. Alien abduction. Lost time. Mystery elements that are never able to be conclusively explained because the evidence is somehow destroyed or compromised. Implants of unknown origin. Secret government storehouses where old evidence is squirreled away, never to be seriously investigated again. Autopsies of mysteriously deceased persons, and autopsies of mysteriously deceased things that may or may not be persons. Locals who are unwilling to talk to the two FBI agents, and the one local who is. The fact that Agent Mulder is haunted by the disappearance/abduction of his sister. And the solving of the mystery in an unfulfilling way that leaves Scully nothing to report on.

I also noticed that the show's look that would dominate the first five seasons – dark, cloudy, foreboding, often raining – is in full effect here, as is the moody synth-driven music by Mark Snow (minus the famous main theme, which wouldn't arrive until the second episode). I was surprised, watching the Pilot episode again, to see just how much of the show's eventual theme and feel was present right there from the beginning. Everything except The Truth being Out There. But don't worry – it is. Oh yes.

(Oh, and I promise not to make this series into one long love-letter to Gillian Anderson. But I had no recollection of the pilot featuring a scene with her in her underwear...her skin lit only by the light of a single burning candle....)
scrawled here by Kelly Sedinger at 1:08 AM

This is a great idea. I just may do the same. How will you be watching them? Will you use Netflix (or something comparable)?

DVD sets from the library, some I own, et cetera. I'm going to restrict comment to the episodes, and not veer off into Extras and all that stuff.

How fun Jaquandor! Great overalls by the way!

I liked the early monster of the week episodes but the "mytharc" spoiled the show for me.

I wasn't a big X Files fan -- nothing against it, it just never grabbed my socks -- so take this for what it's worth, but I've long thought the distinctive gloomy look and overall tone of the series was borrowed from the movie The Silence of the Lambs. This impression may or may not be bolstered by how much you think Gillian Anderson resembles Jodie Foster's appearance in Silence (personally, I think quite a bit, at least in the earliest episodes of X Files).

Roger: No cold shower yet. But I may get there.

Lynn: I loved the mytharc, for the most part, until it got too unwieldy toward the end.

Jason: I don't know about that...I was a faithful viewer of X-Files for years, and Silence has always been one of my favorite films, but I never looked at any parallels. Mostly I think the similarities were part of being in the same kind of genre, at least in part; X-Files was, especially in the beginning, more of a horror show than a sci-fi one, and the whole "murky and rainy" thing is a long-lived trope in the darker types of stories -- especially the ones that focus on the detectives that investigate them.

FYI, I just started a re-watch too. I had forgotten that CSM appeared right off the bat. Just watched "Conduit." Amazing how Lake Okoboji looks just like the Pacific Northwest.