I guess I'll wait for my unavoidable doom, then 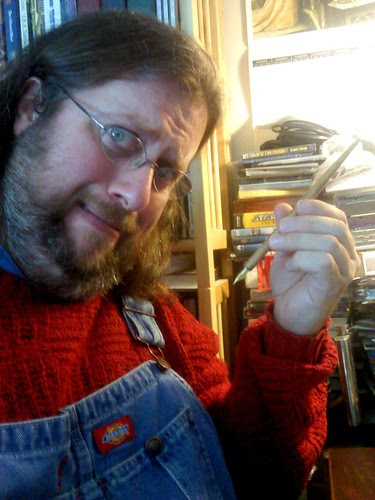 No, I don't think that a dip pen is likely to slow down an encroaching zombie. Sure, it's nice and sharp so maybe I could use the pen to stab the zombie in the brain, but I'm not sure it would penetrate through the skull into the zombie's brain on one shot, and I'm not sure the pen is strong enough to retain its shape and sharpness for a second stabbing attempt. Or maybe I could pour the rum from my hip flask onto the zombie and then use the matches to set the beastie aflame, but there's less than eight ounces of rum in there. Not sure that would make an effective enough, or large enough, flame to bring the zombie to a stop.

I have a feeling that if a zombie cornered me at my desk, I'd be seriously out of luck.
scrawled here by Kelly Sedinger at 11:13 AM

Well, they say that the pen is mightier than the sword, but in this case I'd take a broadsword over a quill pen.

In my case the finger is pointing at my bookcase (the smaller of two we have in our computer room). Not much help there. Then again,they do say that knowledge is power...

Here's my weapon. Not what I would have chosen, but maybe the cuteness will melt the zombie's synapses. On my right is a hot water bottle shaped like a panda bear, which is not much of an improvement.

Chug the rum, hand him the flask and ram the pen right into the brain.PS look for more rum.

Well, I suppose I could papercut the zombies to death with the stack of graded exams next to me...