How I spent International Overalls Day Well, basically, today was for me just another day out and about...but even a bit of online funnery called International Overalls Day made it more enjoyable, in some weird way. So here's how I spent the day (after initial coffee):

Well, there was a load of laundry to do. Yeah, whee! Except it's always fun to dump a basket of warm laundry on top of one of the cats, in this case, Julio: 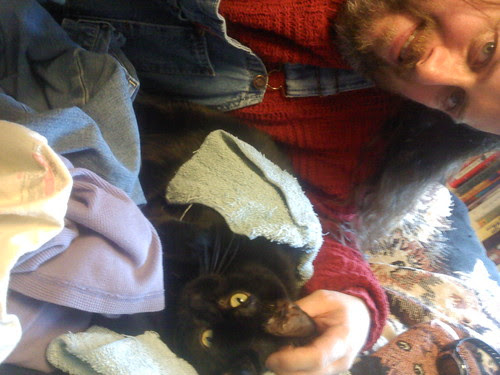 And then there was the drive to the grocery store, with my head apparently swiveling back and forth fast enough (checking to see if I could pull out yet) that it actually blurs. 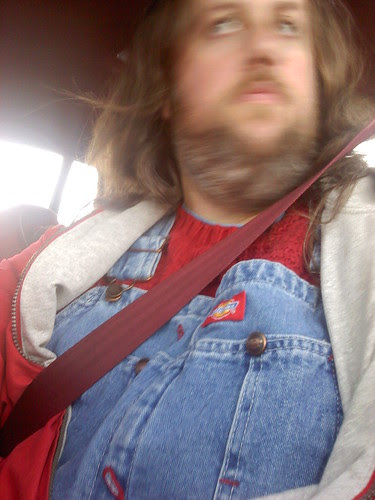 Shopping on the Saturday before Thanksgiving is a major chore. The place was packed, which meant lots of waiting around in certain spots. 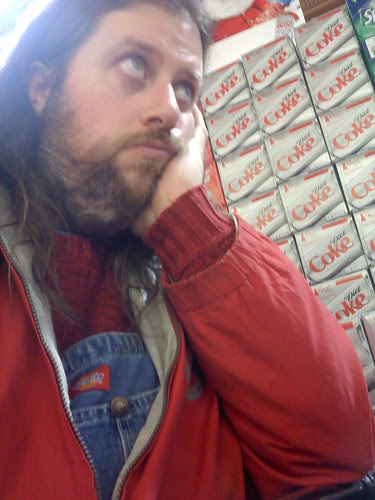 And more waiting at the checkout. 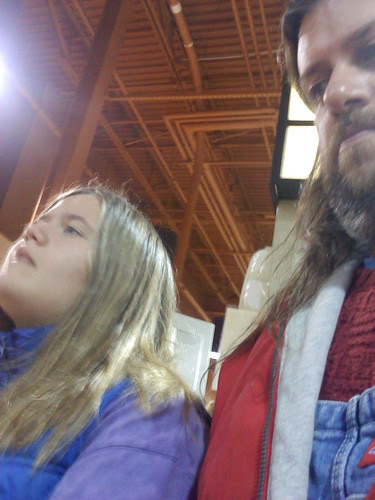 After loading the groceries in the car and heading out, I was able to sneak a photo of the kid as she was trying to keep sun out of her eyes! 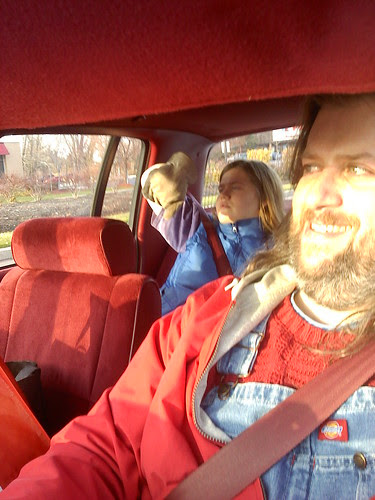 She likes to thwart my attempts to take photos of her, so I'm glad I got this one.

Later on, it was off to Regal Cinemas to see Harry Potter and the Deathly Hallows. (More on this to come in another post.) Here I am, staring at the movie screen. 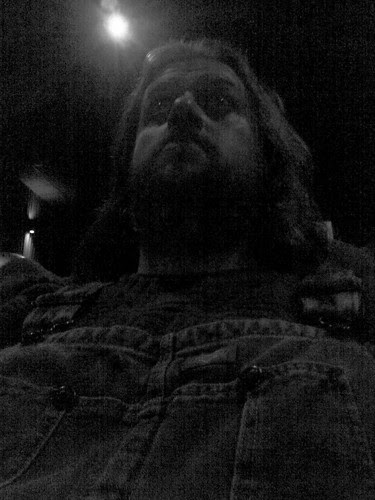 No, I didn't take this during the movie. Not even during the previews. I took this during the commercials they run in between screenings. (And by the way, based on the trailer, I can't wait for Green Lantern next summer.)

Later on, after the movie, it was back home, for dinner and hanging out and finally wrapping up the day with a beer and a book. 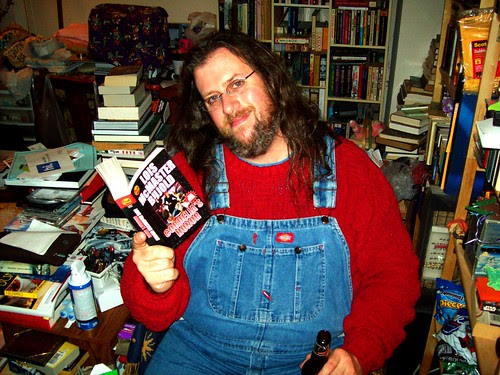 All in all, it was a terrific day! But in many ways it was a totally normal day for me -- going to a movie is a Special Event for us now (I don't care how long it's been since I was a kid, I am still simply not wired to spend $16 to get into a movie), but laundry and groceries and a beer and a book at the end of the day are all perfectly normal things. So is it perfectly normal for me to do all this stuff in overalls. So why the special day?

Well, it's not a big "We want to be taken more seriously!" kind of thing, because, let's face it: bib overalls do not merit being taken "seriously". They're too goofy and fun and even whimsical for that, when worn by folks who aren't actually wearing them as work clothes. I've noticed that overalls have become a popular choice of garment for clowns; and not to suggest that those of us who love overalls are clownish by nature, but it says something that overalls are fairly popular with the pie-in-the-face set. (Of course, I myself am no clown, but I do love a pie in the face. Not sure what that means, but there it is!)

And I don't think it's totally a sense of trying to resurrect something that's out of fashion, either. I've written before on what I think of the idea of "fashion" before, so I won't rehash it except to note my disdain for the notion of a few people in some industry collectively deciding what's "in" and what's "out" and the rest of us merrily going along. But through all my life, overalls haven't really been a fashion "out" until just this past decade. They were common in the 70s, when I was a kid; they became less common in the 80s but still never went away. They came back big in the 90s with grunge and the baggy look that I've always preferred; but it's only in the 2000's that they've become distinctly unpopular. I'm sure they'll come back, if they're not starting to already. But that's not what today was about, anyway.

It's just a sense, I guess, of community amidst some people who tend to have fairly quirky and fun outlooks on life. Certainly none of the folks I've met in the whole "online overalls-wearing community" strike me as stodgy or dull; quite a few are artistic or creative by nature, and all are kind and nice by temperament. Am I saying that people who wear overalls are nicer people? No...but maybe!

And now, back to regular posting topics!
scrawled here by Kelly Sedinger at 10:44 PM

yes, you are right, I think perhaps we are afraid of being foolish! not afraid of not doing the correct thing! I must admit that I for instance never go into too stylish restaurants or only if I have to for job-related reasons, for me the overall thing is a kind of reaction to the yuppie style of many of my academic colleagues, and now I will stop talking !:)