I spent a muchly-deserved, muchly-anticipated long weekend over the Thanksgiving holiday. It was a great time. Details and photos and such after the break. This is a "daily life" type of post, with a bunch of photos. But there's also a punchline at the end which you may find amusing, if you've ever thought I warranted some kind of "just desserts".... 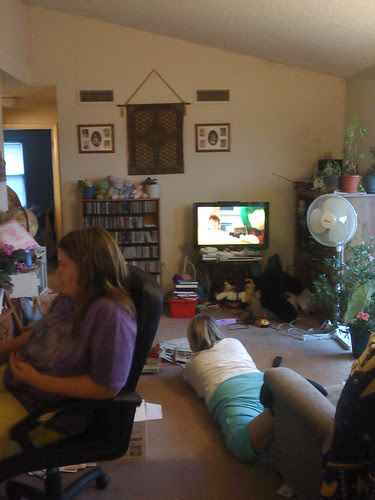 Thanksgiving Morning here at Casa Jaquandor is a lazy affair. The Wife and I are often quite tired heading into this particular weekend, as our jobs both tend to pick up and become very hectic as the Holiday Season approaches. We're always grateful to have a morning that consists of lazing about, watching the Macy's Parade, drinking coffee, and eating donuts. It's especially relaxing because...we don't cook T-giving dinner.

For the last five or six years, our tradition on Thanksgiving has been to eat out. With my parents not really feeling like cooking the massive meal anymore, and with their drive to our home being about an hour, we've decided it's best just to go to a local restaurant. We tried a couple of different places early on, and were disappointed, but then The Wife and I discovered Danny's a few years back. We first went there on an October night several years ago, whereupon we discovered that they were open for Thanksgiving with special meals, including a turkey dinner. We loved their set-up, and we had a winner. So that's where we go. This year, they did away with the "special Thanksgiving menu" and instead set up a buffet line, with all the usual Thanksgiving selections. (Almost all, actually -- The Wife didn't get her beloved green bean casserole.)

After the mid-afternoon meal (when we sat down, the Lions led the Patriots 17-10, but when we left, the Patriots had won 45-24), my parents absconded with The Daughter for a couple of days at their home, allowing The Wife and I some quality time together. This was extremely welcome! The Wife and I have, in the past, found it entirely too easy to lose sight of making time for one another -- especially since for years we've worked opposite shifts at our respective jobs -- so now, we tend to aggressively plan our time together and make the most of it when it comes. And we crammed a lot into the 48 hours we had together!

After T-giving dinner, it's become our own little tradition to go to a movie. This year we selected Unstoppable, the runaway-train movie with Denzel Washington and Chris Pine. But since the show-time was still ninety minutes away, we were able to run home and change into more comfortable clothes. 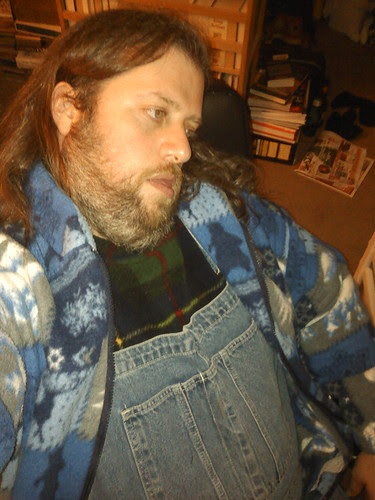 Among the many virtues of bib overalls is that of all pants, they are by far the most comfortable to wear in the hours following an enormous meal.

So we went to see Unstoppable, which we loved. I'll have a full review of the movie up sometime soon, but I do want to note that the Regal Cinemas in the new addition at the Walden Galleria Mall is a great place to see a movie. They've somehow made the concept of stadium seating even better, with seats that rock a bit and armrests/cupholders that swing up and out of the way, which makes for easier hand-holding with one's sweetie during a movie. Yay! (We tend to like the action pictures on T-giving Day. Not sure why.)

The next morning, of course, was Black Friday. We're not the types who go out at four in the morning to find the best deals on stuff; we do go out shopping a bit, but later on, after more morning relaxing and coffee. 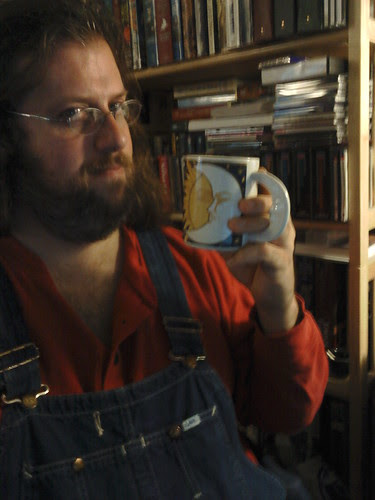 Later on we ventured out to do some shopping. JCPenney (clothes for the kid), Barnes&Noble (book ideas for the kid -- but none purchased), JoAnn Fabrics (sewing supplies for some of The Wife's projects), Home Depot (bought a Dremel 4000 rotary tool, huzzah!), and a few other stops. We had lunch at Panera Bread, where I looked kind of bored: 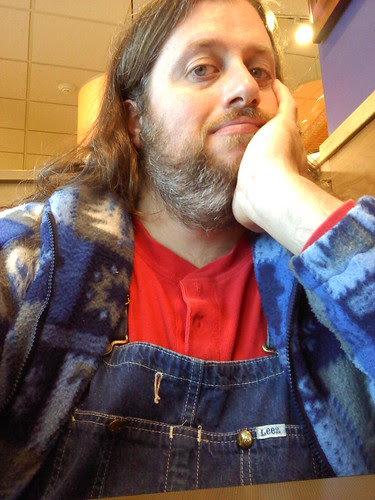 We also planned to make a nice dinner that night of steak, and squash, so it was off to a grocery store to pick up those items among a few others, including...three coconut cream pies. 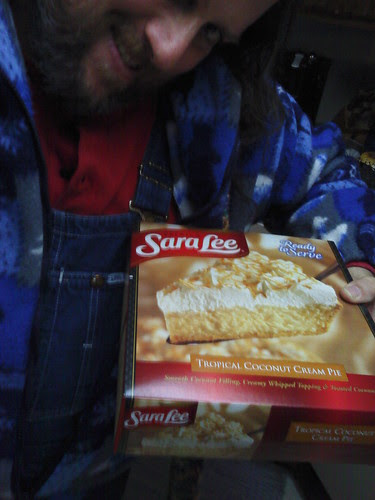 But amidst all of this, we were also having some frustration with a local tire dealer. Our minivan needed new tires, and to make a long story short, The Wife got a quote for new tires several weeks ago, and then, in the intervening period, the tire place changed managers. This new guy proceeded to muck things up to the point that next time we'll just go someplace else. (For the locals: it wasn't Dunn Tire. Not going there in the first place was probably our first mistake.) This manager guy started off by telling us he would honor the quoted price, then said that he could only honor the quoted price if we got the same identical tires as last time (which weren't in stock), then told us he couldn't honor that quoted price unless we could prove, with receipts, that we'd had the previous tires properly rotated every...however long it is you're supposed to allow to transpire between tire rotations.

Anyway, The Wife got more and more angry until the guy finally got all apologetic and offered a $100 discount for the "miscommunication", but we're still unhappy and do not plan to go back. I love it when management people blatantly screw up and try to blame it on a "miscommunication". Ugh!

During all of this, lake-effect snows started to move into the region, for the first real snowfall of the winter. 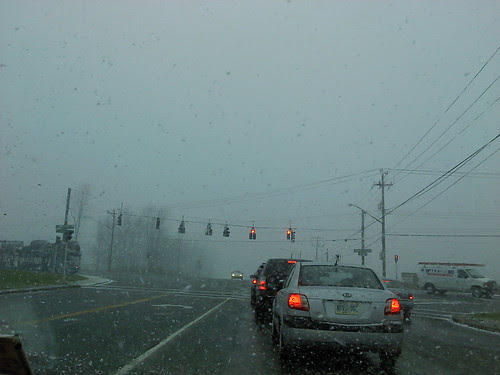 To give an idea of how quickly the snow bands can move at times, this intersection -- about 2 miles from Casa Jaquandor, the corners of Southwestern Blvd. and Milestrip Rd. -- looked like this ten minutes after I had driven through it the first time. That's what can happen in Buffalo, folks! It's been a very mild winter thus far -- the one day before this that we "had snow", a couple weeks ago, it was an overnight dusting that had already melted by the time we got up.

Now, however, the "blustery" has arrived. 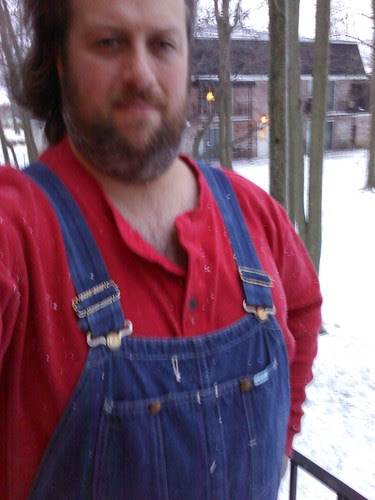 Our other main shopping destination that day was the Orchard Park Antique Mall, which is a big store that is full of antiques, offered by different dealers. We spent close to two hours there, that's how big and fascinating a place it is -- you can find everything there from beautiful antique jewelry to vintage action figures to old books to old furniture. Just an amazing place. 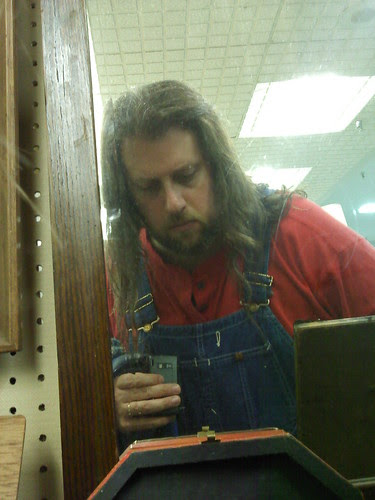 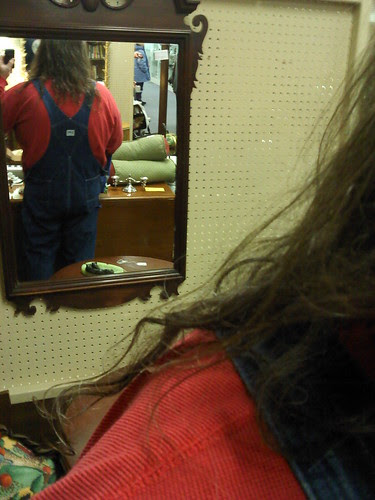 And in any antique store, you can find lots of questionable stuff as well. At one point we saw a set of glow-in-the-dark plastic figurines from the Casper the Friendly Ghost movie that came out in the 1990s. The Wife and I recoiled in horror, because these figurines were a tie-in item when we worked at Pizza Hut. Aieee!

And then there are things which are well-nigh inexplicable: 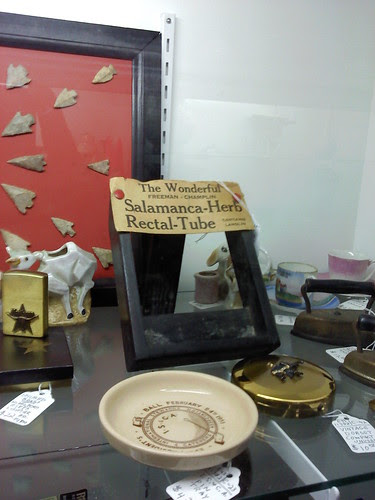 I do not want to know.

After that -- about five o'clock -- we went to pick up the completed minivan and returned home for our steak dinner. Later on we drank some wine, we watched The Man with the Golden Gun...and we attended to the matter of those three coconut cream pies. 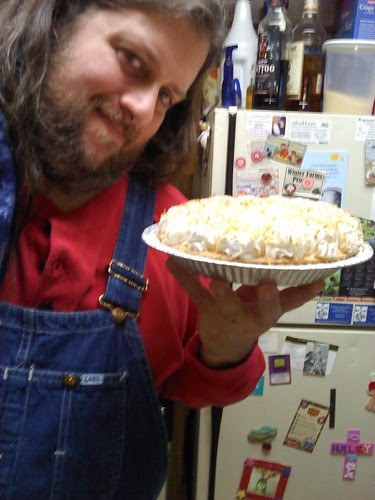 Obviously we couldn't eat three entire coconut cream pies -- not just the two of us, at any rate. So, to what use did we put them? Where did those pies end up?

Well...here's where they ended up: 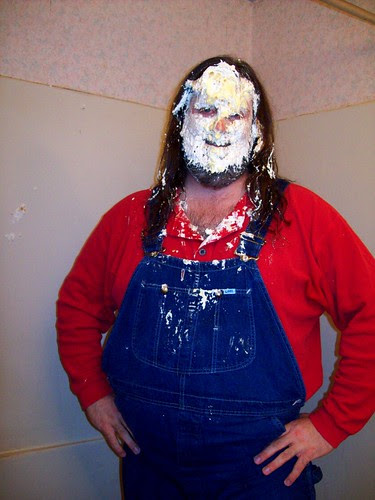 Yup. All three, in my face.

What can I say? I'm a sucker for a pie in the face. This is a fate that befalls me every once in a while, and as my good friend Belladonna once said, "It's a bit of a rediculous tradition I suppose, but it has been fun and keeps me from taking myself too seriously!"

The holidays can be a deeply emotional, and for some folks, troublesome time of year. I find that getting hit in the face with a pie is a good antidote to that. Yes, I believe in "pie in the face therapy". Hey, it can't be any less effective than some other "therapies" out there!

Here's how it went down:

I hope your Black Friday was as much fun as ours (new tires notwithstanding)! 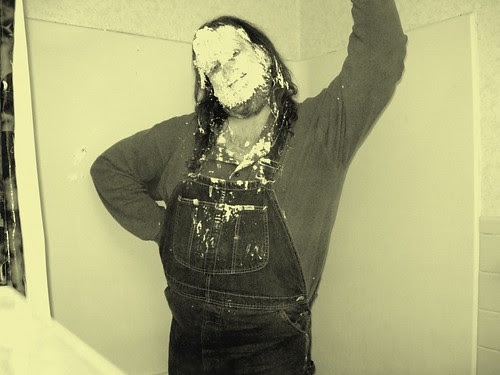 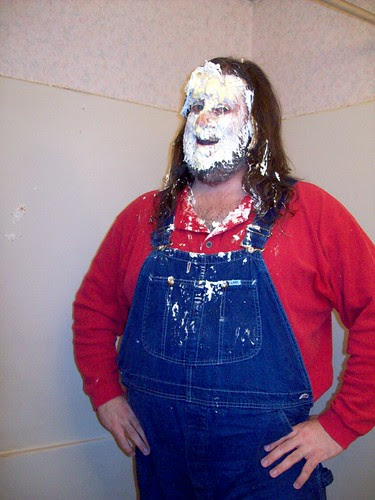 UPDATE: No, this wasn't the first time I've been pied. My last pieing can be found here. (Ignore the date on that post -- I backdated it to keep it hidden as a kind of "easter egg" for people who went digging around for it. Now, I figure, why hide it?)
scrawled here by Kelly Sedinger at 11:11 AM

Ha! WE saw Unstoppable, too on Friday! Review Thursday, at this rate...

We found it a really fun movie, although we kept laughing at the liberties it took with geography with which we're pretty familiar!

Kelly, you took those pies like a man. Max Sennet would be so proud of you.

M.D.: Thanks! It's actually a favorite thing of mine to do, believe it or not. (Or "have done to me", I guess I should say.)

OK...you got me laughing so hard but at the same time strangly craving 'Coconut Cream Pie!!! That was Great Kelly...enjoyed the wonderful read and 'action'... fun seeing the family..

Thanks for sharing your fun day with us all in 'Overall' Land...

Jodi: Thanks! It was SO much fun. I can't recommend a pie in the face highly enough!

I started reading through this post yesterday and was showing my daughter that you guys had bought 3! coconut cream pies...tropical ones at that! We love coconut cream pie! well I was pulled away from the computer and came back this morning to watch what you did with these pies! LoL! You are so silly! I love the music with it also.

Lisa: Thanks! It was such a great time. I love a pie in the face almost as much as overalls!