:: Check out this great compilation of behind-the-scenes photos from Star Trek: The Next Generation, which also includes photos from the four TNG movies. Stellar Cartography was a really cool set -- and there are a couple of really creepy photos there of Alice Krige as the Borg Queen from First Contact, when they were filming the bit where the Queen was nothing but a head and a spinal column. I also like the "Man In Suit!" shot of the guy who played the oil slick that killed Tasha Yar, Jonathan Frakes looking like he's coming on to women constantly, and a couple of shots of close-ups where you see that the poor actors are acting with a big-ass camera about ten inches from their faces.

And here are my two favorites. This is Brent Spiner, Rick Berman (the main Trek producer during the 1990s), Patrick Stewart, and, sitting in the Captain's chair, Trek composer-extraordinaire Jerry Goldsmith. 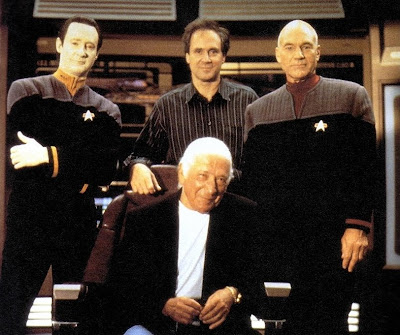 And I'm not sure when this next one was taken -- probably from the set of either Insurrection or Nemesis. I'd remember if I could place those alien dudes Patrick Stewart is mugging to, but the first of those two films was merely forgettable while the second was awful. But that's not the reason for posting this photo, anyway. 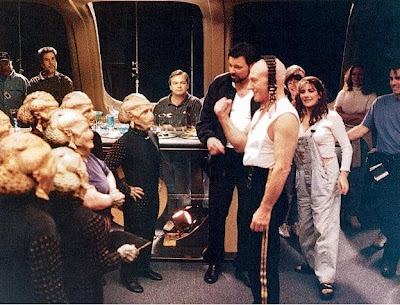 (I always thought Sirtis was utterly beautiful, and a fine actress to boot. I remember being glad when the producers finally realized that she was a gorgeous woman who didn't need plunging necklines and skimpy skirts to look gorgeous, and just put her in a regular old Starfleet uniform.)

:: This is kind of strange. Over at ToolGuyD, one of my favorite blogs on hardware and tools, a post recently appeared scoffing at a very weird new tool being made by Husky. (Seriously -- that tool is just strange. I looked at it at Home Depot last week, and I couldn't believe what a goofy item it is.) Well, they've since received a number of posts on that tool in comments that they now believe to be posted by shills either for Husky or for Home Depot. It's all very strange! Why go to this level of chicanery to try to stand up for a 48-in-1 ratcheting wrench that looks just plain odd?

More next week!
scrawled here by Kelly Sedinger at 4:27 PM

About the Marina Sirtis picture: the movie here is Insurrection, not Nemesis.