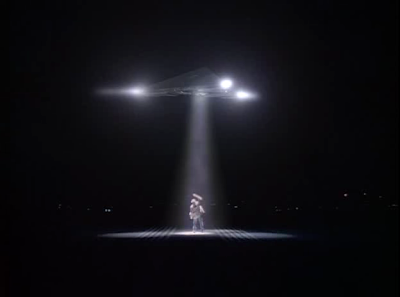 "Mr. Mulder, why are those like yourself who believe in the existence of extraterrestrial life on this Earth not dissuaded by all the evidence to the contrary?"

"Because...all the evidence to the contrary is not entirely dissuasive."

"Mr. Mulder, they've been here for a long, long time."

That exchange comes at the end of "Deep Throat", the second episode of The X-Files. Even more than the Pilot, "Deep Throat" establishes a lot of the groundwork for what is to come over the course of the series. More tropes are introduced: Government secrecy and conspiracies; government collusion with apparent alien visitors; shadowy governmental agencies which are apparently above the law; the continual failure of Agents Mulder and Scully to come away from their investigations with any proof at all of what they know to be the case. And most importantly – indicated by the title of the episode – the establishment of an inside source of information who will be Mulder's confidant and informant, but who may or may not be on Mulder's side.

This story takes place mainly in an Idaho town near an Air Force Base that does not appear on any maps, due to the secretive nature of its work. A pilot there has turned up at home, cowering in the corner and covered with terrible rashes and skin lesions. The Air Force takes him into custody, and holds on to him for several months, telling his family nothing at all of his whereabouts or status. Somehow Mulder gets wind of this and tells Scully that "we're heading to the Spud State to investigate a little kidnapping." When Scully asks why Mulder is interested in an apparent kidnapping with no "paranormal" element, Mulder replies, "This case has a smell to it. A certain 'paranormal bouquet'."

But before leaving for Idaho, Mulder is confronted by a dark-suited man who tries to warn him off the case and tells him that he can give Mulder information when it is in his best interest to do so. We'll never learn this man's name; we will only know him as "Deep Throat" (which I don't recall anyone in the show actually calling him). This, too, will be something of a meme throughout the show's run: people telling Mulder things in sufficiently vague terms that he doesn't really have a great deal of choice to make.

Off go Mulder and Scully to Idaho, where they learn that experimental aircraft are being tested – but the aircraft are capable of speeds and maneuvers impossible in current aeronautical technology, which leads Mulder to hypothesize that the government is working on technology gleaned from the UFO that crashed in Roswell, NM in 1947 (the Air Force base in the episode being one of the places to which wreckage of that craft was taken). Suddenly the missing pilot is returned to his family, but he seems very strange now, oddly passive and childlike, and he can't remember anything. Mulder thinks he has had memories erased, but Scully thinks that's impossible; more likely, the strange pilots up there are the washouts of a testing program who couldn't handle the stress.

Anyway, our two agents meet a couple of teenagers (one of whom is played by a young Seth Green) who like to sneak onto the AFB grounds and watch the test flights (which happen at night), which of course leads Mulder to do the same...only he gets caught, after seeing one of the aircraft up close and personal. Mulder's whisked away by men who are doing something medical to him. Meanwhile, Scully is on her own and has to figure out how to get Mulder back, which she finally does – only to discover that he has no memory of the last twelve hours. They return to Washington, with Scully indicating in her field report the completely inconclusive nature of their investigation. Mulder, meanwhile, meets again with his new informant. The exchange above closes out the show.

"Deep Throat" is a fine, fine episode, and in retrospect, it's probably one of the most important in the series's run. It establishes so much of the dynamic that would later dominate the show's developing mythology, especially the knack Mulder has for being right while never being able to come up with any evidence. I also like how Mulder and Scully are still at odds quite a bit of the time, with the trust between them still not there and with Scully basically approaching her assignment to the X-files with professionalism but also with skepticism bordering on conviction that all of it is complete BS.

This episode also establishes the high level of production values that were a key part of the success of The X-Files. Many shots are downright cinematic in nature, as is the way the showrunners are able to shoot around the Vancouver area in ways that double for the less-mountainous areas of Idaho. I also liked the framing of the episode's final scene, in which Mulder is jogging on a college track when Deep Throat comes to visit him; there is a nice combination of long shots and close-ups that makes the scene nice to look at. The X-Files is often credited with bringing cinematic production values to television, and it's easy to see this influence in this episode.

So, what is to come? The truth, after all, is out there!

(Oh, this was also the first episode to use the show's signature titles sequence, complete with Mark Snow's distinctive X-Files Theme and the "Truth is out there" tag line. The pilot's credits had simply run over the opening scene, after the teaser.)
scrawled here by Kelly Sedinger at 12:32 AM

One of my favorite episodes, too. Deep Throat was a terrific character, although I later grew to love Mr X, also.