"I only am escaped alone to tell thee." 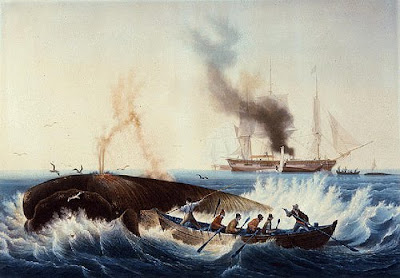 Sheila O'Malley points out that today is the 149th anniversary of the publishing of Moby Dick, with a typically fantastic post on the book. I've started -- and stopped -- reading Moby Dick a number of times over the years, ever since college, but just a month or so ago I finally got all the way through it. My original notion was to serialize it for myself, reading two or maybe three chapters a night, as Moby Dick is comprised of 135 very short chapters. I figured that taking the book in small chunks would make it, oh, more digestible. What I didn't expect was that this manner of reading the book didn't make it more "digestible" at all -- at this point, it turns out that I'm able to digest the book just fine. What my self-serialization of Moby Dick did was make the book more exciting. Much more exciting -- and this is all the more amazing, seeing as how if you distill the book down to just those parts where something is actually happening, it's probably only about a hundred pages long.

I was lucky in that I knew very little about Moby Dick, aside from the "big picture" stuff. What I knew was this: A guy we're supposed to call "Ishmael" gets a job on a whaling ship, the Pequod, which is skippered by a fiercely grim Captain Ahab, who lost one of his legs to a white whale upon whom he has vowed vengeance. Off they go, presumably to do some normal whaling, but in reality to seek out the white whale, named Moby Dick. They find the white whale, in the end, but Ahab and everyone else on the Pequod perishes in the struggle. Everyone else save Ishmael, who floats away to safety atop a coffin carved by his drowned friend, a savage named Queequeg.

And of course, I knew that Moby Dick played a thematic role in Star Trek II: The Wrath of Khan, in which Khan views James T. Kirk as his own White Whale, even dying with the same words as Ahab: "From Hell's heart I stab at thee! For hate's sake, I spit my last breath at thee!"

The greater part of Moby Dick is given not to the story of the pursuit of the whale. Nor is it given to deep analyses of the psychology of whalemen, alone on their ships at sea for months or even years at a time, with their only other human contact coming when they meet other whaling ships. The bulk of the book is given to the whales and their nature and their hunting. Chapter after chapter after chapter goes by, each dealing with some aspect or other of whales and whaling, and it's in this way that we do, in fact, gain insight into the psychology of whalemen and in the nature of Ahab's pursuit -- for as we learn these things, we start to learn just what it is that Ahab is after.

The book opens, before the first chapter, with many pages of quotes Melville has tracked down pertaining to whales. He must have been steeped in the literature of the sea back then, to have been able to collect all these:

"So be cheery, my lads, let your hearts never fail,
While the bold harpooner is striking the whale!"

It's interesting that the book proper opens with that famous line, "Call me Ishmael", when we lose track of the narrator for great swathes of the book at a time. Ishmael disappears entirely, as does Queequeg and Starbuck and even Ahab and the Pequod much of the time. I wonder if in some way Melville isn't trying to ultimately get us to identify not with any of them but with Moby Dick himself?

One final observation, which I've made before (I know I said it on Facebook, anyway): while Moby Dick's opening line is one of the most famous in all literature, I find the opening sentence of the second chapter to be strangely evocative of the adventure to come:

I stuffed a shirt or two into my old carpet-bag, tucked it under my arm, and started for Cape Horn and the Pacific.

Interesting, then, that we follow Ishmael as far as the side of the water -- and from that point on, we don't follow him much at all.

(The image atop this post is from a painting called Whale Fishery, by Ambroise Louis Garneray. The painting is used as the cover art for the edition of Moby Dick that I read.)
scrawled here by Kelly Sedinger at 9:59 PM