We all know that newspapers are slowly dying away, their readership and functions taken over by new modes of media and news propagation. But it's always interesting to behold the physical manifestation of newspaper decay. Case in point: the front page of today's Buffalo News. Here it is: 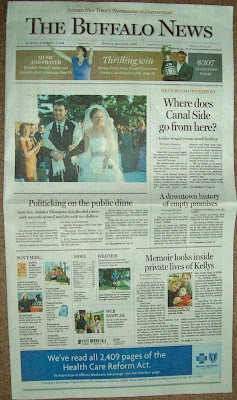 What's wrong with this? Well, here's a list of stuff I spotted off the top of my head when I opened up the paper this morning:

1. The upper half of the above-the-fold section is taken up by the paper's logo, a giant banner indicating the locations of other stories, and the self-congratulatory "Paper of Distinction" thing at the top.

2. Below the fold, we have an Index to the paper's sections that takes up, oh, one-fifth of the front page's entire space. Below that, we have an enormous footer ad for a local health insurance company. I haven't measured things out, but I'd say that there is almost one-half of the entire front page devoted to stuff that isn't the news.

3. There are only four stories on the front page. Two deal with the same topic -- an important local topic, to be sure, but do both related stories require front page real estate? Of the other two stories present on our front page, one covers some shenanigans by a local politician, and the other previews a book soon to come out by a prominent local citizen (who is only prominent because of who she is married to -- Jim Kelly, the guy who retired thirteen years ago as the quarterback of our football team).

Four stories on the front page. That's it. Four stories, covering three topics. Each topic is of local concern only, and one of those is a human interest story, not news.

National or world stories on the front page today? Zero.

(I am not saying that the News shouldn't be covering those stories. I'm saying that not one of these seems to me important enough to be a front page story.)

4. Above the fold, we have just a single story. It's pushed over to the right by a surprisingly large photograph which is almost certainly the first thing you're looking at when you pick up the paper.

I could probably gripe some more -- I find the News's regular habit of putting the total dollar amount of the coupons enclosed in all the advertising, right up there above the banner, highly odd -- but that all is pretty illustrative, I think. We have a paper that focuses on pretty graphics, lots of colors, white space galore, and not a whole lot of news.

How fare your papers, readers?
scrawled here by Kelly Sedinger at 12:34 PM

But there are $307 in coupons available! And they tell you that in the masthead.

Your Buffalo News looks about like my Salt Lake Tribune. All the same problems, compounded in the Trib's case by their recent addition of a sticky note bearing yet another damn ad that gets slapped right over the top banner thing, so if you want to see what those interior stories are, you need to peel off the sticker. More and more advertising, it seems, and less and less of the content the ads are supposed to pay for...

the Times Union is smaller Mon-Wed, larger on Thursday, about the same Fri-Sun. It's better than the Buff News