How dumb are we? 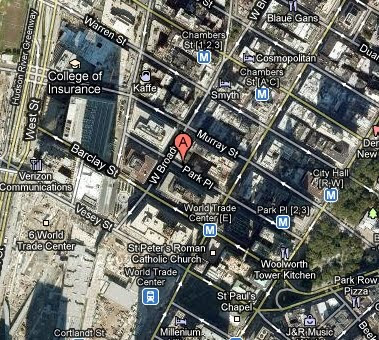 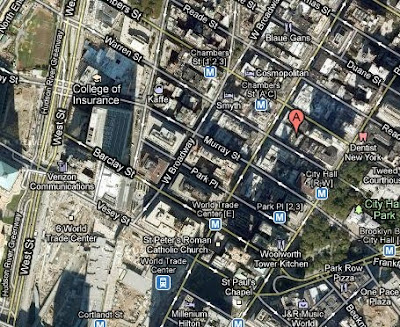 In the course of all the idiotic folderol regarding the "mosque" that's proposed for Lower Manhattan -- which the idiots refer to as the "Mosque at Ground Zero", because well, it's close enough to being that even though it's not really a mosque and it's not really at Ground Zero -- I've been reminded by the saner voices out there that there are millions of Muslims who are actually American citizens, and that there are thousands of those very American Muslims who live and work in New York City, and that some of those folks were unlucky enough to die on 9-11-01 too, no matter how much the Sarah Palins of the world like to think that only white Christian blood was spilled that day.

It also occurred to me, therefore, that if there are Muslims working in lower Manhattan, those Muslims probably need places to pray. Maybe there's something already there! So I checked Google, and sure enough, there is.

That first Google Maps image up there? That's the proposed location of the Islamic Cultural Center on Park Place. Now, note the two blocks' worth of giant buildings between that location and the World Trade Center site. It's not on Ground Zero, is it? Nope. In fact, if you're worshiping there and you duck out the front door for a cigarette, you won't even be able to see the WTC site from there.

The second Maps image? That's the location of Masjid Manhattan, an Islamic center that's been located in Lower Manhattan since -- wait for it! -- 1970. And it's just two blocks farther away from Ground Zero than the proposed Islamic Cultural Center! So, while we're demonizing the people who want to build a new center, shouldn't we be consistent and demand the immediate closure of the old one? Or is Murray Street, between Park Place and Warren Street, the boundary line below which every inch of Lower Manhattan is "hallowed ground" (which really means, "Only Christians need apply")? (Although, according to the Masjid Manhattan website, they're looking for a new location themselves, so maybe we're just figuring that they'll go away all on their own.)

Anyway, my point is this: there has been a place for Muslims to congregate in Lower Manhattan, within a thousand feet of the World Trade Center site, since the same year the WTC opened for business. "Hallowed ground", my ass -- what's at work here is bigotry, pure and simple, whether it's "No Muslims allowed!" or "Well, we're used to the ones already here, but we don't want no new Muslims hangin' about raisin' trouble."

Here's Jon Stewart on this topic:

I especially like the parallels Stewart draws to the Charlton Heston NRA speech.

UPDATE: Oh, holy crap. I can't believe this country sometimes, I really can't. The anti-mosque folks had themselves a rally and harassed some black guy who wandered through the crowd because...well, I guess it's because you can't really tell blacks from Muslims. They all look alike, don't they?

We keep pushing the Bar of Crazy down so far, I think it should be popping out of the ground in China by now.
scrawled here by Kelly Sedinger at 9:31 AM

i've been sayin' it for the last few months; I think some people just want to be intentionally stupid.

Yeah, that Daily Show segment I had already decided to link to in my TU blog; now I must.