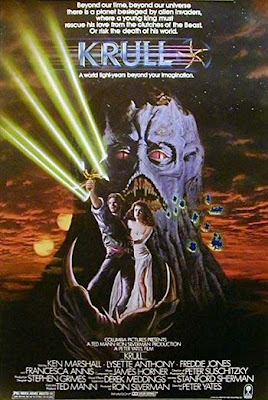 Ah, the fine lure of 1980s cheese movies! I loved Krull when it came out, and saw the thing twice. It hit all of my sweet spots at the time. But then, I was 12, and I've grown a bit more sophisticated since then. My sweet spots at the time? A young Prince thrust into Kingship by the sudden onset of war; sword fights; aliens with ray guns; aged wizards come to nudge the young Prince toward destiny; a funky and mythical weapon; a really pretty Princess; the Prince's motley collection of allies, most of whom are outlaws; perils like enormous spiders and quicksand-filled swamps and a monstrous villain who lives in an impregnable fortress of rock.

Yeah, those were all of my sweet spots when I was 12. And as it turns out, these are still a lot of sweet spots now that I'm 38! Which is probably why I still have a lot of fondness for Krull even though it's more cheerfully goofy to me now than the serious bit of heroic fantasy I thought it was back then.

The plot of Krull is...well, from my list of "sweet spots" above, you can pretty much figure it out for yourself. There's a planet called Krull, which is invaded by a force of soldiers called "Slayers" who wield ray guns and fly around the galaxy in a giant mountain-shaped fortress made of rock that lands on one world after another for conquering. This enormous spaceship lands on a planet, whereupon its hordes of ray-gun wielding soldiers in space armor ride out on horseback to take over. Yowza!

But the planet Krull isn't to be taken so lightly. Two Kings decide to put their kingdoms together, by marrying their son and daughter. But on the eve of Prince Colwyn's wedding, the Slayers attack and kill the two old Kings and kidnap Princess Lyssa! Oh noes! Colwyn wakes up the next morning, amidst the wreckage of battle, to find his father dead, his bride a prisoner, and a cranky old wizard (who is not named Obi Wan or Gandalf) binding his wounds and telling him to get up off his arse because he's a King now and he needs to go fight the Slayers and their horrible leader who is known by the horrifyingly scary name "The Beast".

And off they go. First they're off to pick up a nifty weapon called a "Glaive", which is basically a really ornate throwing star that seems to work by remote control or mental command or something like that. Then they need to find a powerful Seer, because they need to know where The Beast's fortress is going to be (it changes location every morning). Along the way they meet some brigand-outlaw types and recruit them to their cause. And so on.

It's all very typical, although I didn't realize it when the movie came out. It's full of British actors, which always helps lend an air of weight and believability to the most ludicrous plots. The film is full of beautiful shots of wonderful vistas (its director of photography, Peter Suschitsky, also shot The Empire Strikes Back), but a lot of it doesn't make a whole lot of sense. The Glaive is touted as an amazing weapon, but by the time we get to see it in action, it's actually a bit disappointing; poor Lysette Anthony as our beautiful Princess literally has nothing to do as she is a prisoner for ninety percent of the movie; some of the film's events feel contrived, as if the screenwriter felt the need to pad out the running time and tick off some well-worn fantasy conventions along the way.

The most notable aspect of Krull now, nearly thirty years after it came out (holy crap!), is its score by James Horner. It's typical young Horner: big and muscular, with lots of nods to various classical masters and to Jerry Goldsmith. Horner's tendency toward self-referencing isn't in much evidence at this point in his career, although there are places where the score sounds a lot like his most noted score to that point, Star Trek II: The Wrath of Khan. The score also has two of the best melodies of Horner's entire career (the heroic "Main Theme" and the love theme).

Krull really needs to be seen through the prism of time, for what it is: an artifact of the 1980s. If this movie were to be released anew today, it would be laughed off the screen, with its occasionally murky visual effects and its earnest and irony-free script. Oh well. I still have a soft spot for it. The scene where Colwyn and friends ride the Firemares across a thousand leagues is still a thrilling bit, even with some wretched 1980s-style rear-projection, and Ken Marshall is, all things considered, a pretty good Prince Colwyn. I imagine that as Hollywood gets more and more focused on remaking old properties, a new version of Krull is probably inevitable at some point. I'm not sure how I'd feel about that.

For a taste of Krull, here's a fan-made music video I found, using clips of the film and the best track from the score, "Riding the Firemares". The main theme kicks in at about the :36 mark. Try to not have that tune in your head for days. I had that theme in my head for years, which is amazing considering that for many years, the score album to Krull was nearly impossible to find. I didn't locate a copy myself until I was in, of all places, a Barnes&Noble in Cedar Rapids, IA in 1995, and that was a single-disc album with lousy sound that left off most of the score. The entire score has been re-released on a couple of film music labels since then (including La La Land Records, just in the last month or two).

ADDENDUM: Oh, what the heck. Here's the actual scene of "Riding the Firemares". The idea here is that Colwyn and company has learned where the Beast's Fortress will be the next morning...but the location is a thousand leagues away, so the only way they can clear that distance in time is to try to capture, harness, and ride the Firemares. What are Firemares? They're horses. Really, really fast horses. Horses so fast that when they really get going, well...here's what happens.

Even with the bad rear-projection -- oh, what George Lucas's ILM could have done with this scene -- it's a terribly fun part of the movie.
scrawled here by Kelly Sedinger at 10:05 AM

Hey... great site!!! I picked it up over at Cal's Cave of Cool. He is the man, so I always check what he is reading. Glad I did.

Secondly, Krull is the shit!!!! I am 31, and I remember that movie as a kid... my pops took me to see it (we went to the movies once a week). But what I remember most was after the movie came out on home video, the poster in the video store by my house. it was up for years, even though they rotated posters regularly, they NEVER took that one down. It was bad ass!!!

I have a 7 year old, and I make him watch a ton of 80's flicks so he can share my childhood. His favorite movie evr is Monster Squad, and his favorite Star Wars is Empire Strikes Back... I guess I got him on the right track!!!!

Keep up the good work, I will be checking back regularly. If you get a shot, check my blog out.

I think you will enjoy it! Please to make your digital acquaintance. Later!!!!

Krull is one of my guilty pleasures. It had every genre that a kid could love in one film. Cool characters and a weapon that I would want fighting any form of evil. Even the fire stallions and that awesome Cyclops guy. The whole theatre cheered when he fought his destiny and helped save the day. Ah good stuff.

Krull was one of my favourites. I had a copy on VHS that my daughter found when she was younger and she loved it as well. Not as well executed as other movies of its time, but incredibly imaginative.