:: Who doesn't love some retro-future stuff? Here's a segment from an old Disney show about highways in the future. Some of this stuff is kind of prescient, while other stuff falls into the "Hey, it's the 21st century -- where the $*&#! are my flying cars!"

I'll even trade my flying cars for those cantilevered skyways in the mountains!

:: Scientific American has a nifty interactive doodad about "12 Events That Will Change the World", with the events discussed not just for what might happen but also for how likely they are.

:: Best not to even leave the house, kids -- otherwise you'll be maimed or killed!

:: I always figured, from all of my readings, that the ancient Greeks were a generally humorless lot, but a recently unearthed sculpture reveals a hidden side to Greek comedy: 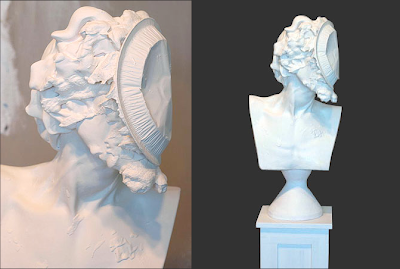 (I have no idea where I got that from. Saw it months ago and copied it because I thought it was funny, and then forgot about it.)

More next week!
scrawled here by Kelly Sedinger at 7:53 PM