I really hope he wasn't trying out for "Hell's Kitchen" 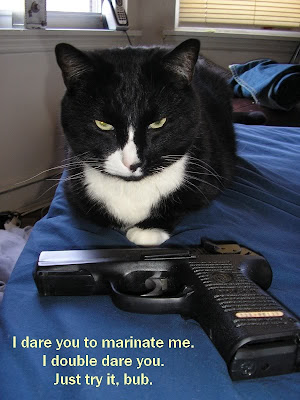 Well, I see that Buffalo has hit the national news wire again, this time for the actions of one of our fine citizens. Sigh:

Buffalo police rescued a cat from a Cheektowaga man who apparently was planning to make a meal out of his pet because he thought it was ill-tempered, authorities said Monday.

When Ferry-Fillmore District officers pulled over a car driven by Gary L. Korkuc on Sunday night during a traffic stop, they said they heard a cat crying from inside the trunk and investigated.

What they found has left animal lovers at the SPCA Serving Erie County in shock.

The cat, according to police, was in a cage “marinating” in a mixture of crushed red peppers, chili pepper, salt and oil.

Apparently the guy likes his spicy food, though: crushed peppers, chili pepper, and salt. Of course, I find out about this the same day that the finale of Hell's Kitchen airs, and another episode of Master Chef, so even as a cat lover who is appalled by the very idea of this, I can't help but be somehow amused at the culinary line of thought here.

The tale has a happy ending, though: the cat was adopted already by someone who isn't planning to cook him.

"I got him home now, and he's just looking and exploring like crazy," she said Tuesday night. "He's really passive and not aggressive at all."

He has a new bed, a new litter box and a new name: Oliver.

"He's all black, but he has white under his chin, on all his paws and on his chest," Dankowski said. "They bathed him so many times to get the spices out, so he feels so soft. He's absolutely beautiful."

OK, I'm sorry, but there's just something a bit morbidly funny about all this. There just is. I'm envisioning a woman holding her new cat on her lap, stroking his back and his chin, enjoying his purring...and starting to get a hankering for a pizza....
scrawled here by Kelly Sedinger at 11:10 PM

If I weren't upset about something else already, this might amuse me. But really, I'm awfully upset and shocked and appalled, especially since I have a brown and gray and white furry thing who likes to share my bed with me on occasion.

I'm glad the cat is okay but I can't stop thinking that the guy must have been getting cooking tips from Warner Bros. cartoons. Marinating the cat while it's still alive? I mean, I'm glad it was still alive but... you know...