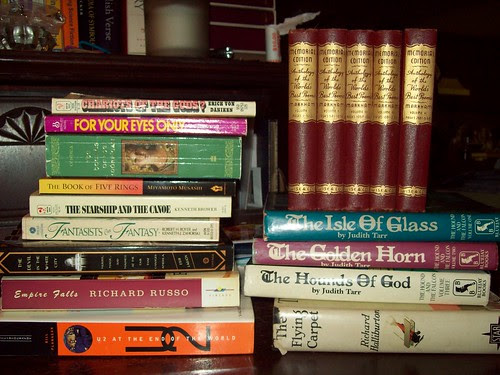 The other day was the quarterly Used Book Sale at the local library, which I honored as I usually do by filling a box with books for about $15. I'm telling you, folks, if you like to read, find out when your local library is having a used book sale.

The stuff in the picture is just the stuff I got for myself; I got seven or eight books each for The Wife and The Daughter. Great bargains, all. Here's a rundown:

:: Chariots of the Gods?, by Erich van Daniken. I've always had a soft spot in my heart for gonzo theorists like van Daniken. I read stuff like this as fiction, basically.

:: For Your Eyes Only, Ian Fleming. This is not a novel but a collection of several short stories featuring Agent 007. (Specifically, "From a View to a Kill", "For Your Eyes Only", "Quantum of Solace", "Risico", and "The Hildebrand Rarity".) I've just decided to start trying to gather all of the Fleming Bond books, but I want them in old, cheap paperbacks. Hence, I grabbed this one right up...and then discovered that I've already got one. An earlier edition, even. Oops. (Buying duplicates of stuff you already own is a constant danger of used book sales.)

:: The Hounds of the Morrigan, by Pat O'Shea. I know nothing about this, but I loved the cover art.

:: The Book of Five Rings, by Miyamoto Musashi. I also have a long-standing soft spot for Asian philosophy.

:: The Starship and the Canoe, by Kenneth Brower. I bought this by virtue of its trippy title and the blurb comparing it to Zen and the Art of Motorcycle Maintenance.

:: Fantasists on Fantasy, a collection of essays about fantasy.

:: The Devil in the White City, by Erik Larson. Serial killers at the World's Fair in Chicago. A friend recommended this to me some years ago, and I forgot about that recommendation until I saw the book.

:: Empire Falls, by Richard Russo. I've been intending for some time to read Russo, and the presence of his most decorated book (it won the Pulitzer) at the sale made it easy. I've already started reading it.

:: An Anthology of the World's Best Poems. It's a six volume set, but only five were there. I'm a sucker for old poetry collections; as tastes change and as more poetry gets produces, anthologies shift, and many poets who were beloved decades ago won't be found anywhere near an anthology today. It's not that I need two dozen volumes containing the same poems by Whitman, Poe, Shakespeare et al.; it's that I want to have volumes containing all of the voices that are now mostly forgotten.

:: The Hound and the Falcon Trilogy by Judith Tarr. No idea at all, but grabbing an entire trilogy I haven't read, in a genre I love, in hardback, for three bucks? Yeah. Sign me up.

:: The Flying Carpet, by Richard Halliburton. I love Halliburton. He was a wonderful writer, one of those adventurers of the first decades of the 20th century -- like Frank Buck -- who journeyed all over the world just because he wanted to see it. (Here's an earlier review of mine of one of Halliburton's other books. Halliburton is one of those authors whom I buy on sight when I see his books at the sale, which is why...ahem...I now own three copies of The Flying Carpet. But I can justify this one by the fact that it has an intact, if a bit worn, dust jacket intact!

Not pictured (because I mistakenly put it with The Daughter's stuff): How Much For Just the Planet?, by John M. Ford. Ford was a science fiction writer who passed away several years ago. This book is one the higher regarded Star Trek tie-in novels that began coming out in the 1980s. I rarely read tie-in books these days, but this one's got a pretty high pedigree.

Next sale's in September!

I have yet to read one of the original Ian Fleming Bond books. However, here's an interesting factoid; did you know that he also wrote "Chitty-Chitty Bang Bang?"

The thing that tipped me off was that the love interest was called "Truly Scrumptious," rather than something less obvious, like Trudy.

I love Chitty Chitty Bang Bang the movie and know all the songs by heart. And I am proud of that.

Yup -- not only did Fleming write Chitty, but the movie version was made by the same production company that did the Bond films as well!

We had our (semi-annual)sale last weekend as well. My big find: 3 volumes of the original "Doctor Doolittle" series (1927). Completely unpalatable to modern kids, but gorgeous books nevertheless, with illustrated boards and end papers. Also, Mary Stewart's "The Hollow Hills" (grabbed "The Crystal Cave" last fall) and "Future Shock". Curious to see where he was right and where he was wrong. Plus, a couple Jack Chalker paperbacks. Geez, how many series did that guy write, let alone novels?

One ominous note: I saw a number of people moving through the sale stacks scanning bar codes with some kind of PDA-thingies. (Those things can scan?) A friend said they're probably using that to compare against Amazon prices, and then snagging the obvious resale targets. I guess I'm happy that I usually focus on pre-barcode books.