Yesterday I achieved something grand. Something wonderful. Something that will, I think, live on in the annals of my life as one of my finer deeds.

I beat Super Mario Bros. on the Wii!

OK, now that I've written the words right out, it doesn't seem quite so momentous. But this is the first video game I've beaten since college. So, huzzah for me! 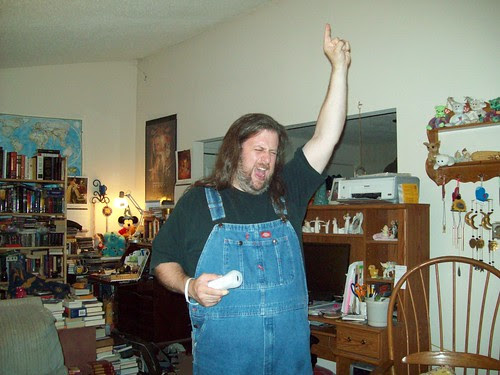 What did I think of Super Mario Bros.? It's really a great game. It just is. There's so much cool stuff in it, and it's not entirely linear, in that I know there are things in it that I never saw on my way from the first level on World One to the last on World Eight. Here are some things I liked about the game:

Variety. It's not the same screen, over and over and over again. In these kinds of games -- "clearing level" games, which go all the way back to Pac-Man and Space Invaders -- you have to get through an entire level before moving on to the next. Used to be that the "next one" was basically the exact same level again, but a little harder by making the things that can kill you move faster, or start closer to you, or stuff like that. With Ms Pac-Man, you started to see literally different levels: a new maze every few screens. (Well, a total of four mazes, anyway.) Well, as computing power of game systems goes up, so do the possible levels, so now Mario's not just running up the same set of girders and ladders anymore; now he's running through eight different "worlds", each of which boasts seven or eight "levels". 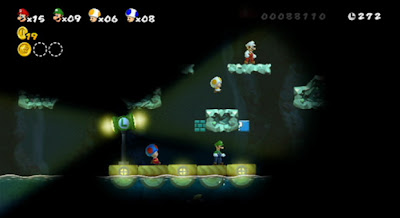 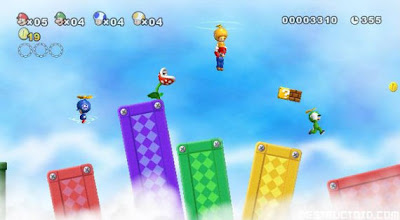 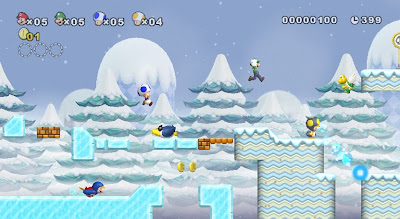 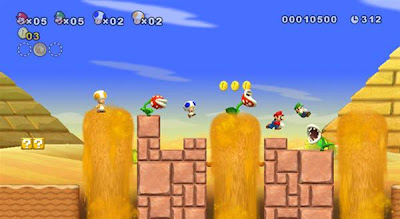 In some levels you run through desert landscapes, riding on the tops of gushing geysers of sand. In others you slip and slide your way through snowy mountains and ice-filled caverns. There are spelunking levels that take place in darkness so you can't see where you're going or what's coming at you, and there are flying levels where you are literally jumping around the sky without a safety net.

(I'd be lying if I didn't see the final world, World Eight, with its volcanoes raining lava and rocks down upon you and its lakes of fire, as the planet Mustafar from Revenge of the Sith....)

Super Mario Bros. has a pretty good reward system. You never feel like you're just knocking off one level after another, ad nauseam. There are small things to achieve along the way: the collection of regular coins and "star coins", the collection of power-ups, extra challenges such as carrying those little toad-guys through levels unscathed.

I wish I could remember where I read this, but a review of the game I read recently compared the levels to Pringles: they're short enough that you tend to think, after you've completed one, "Ach, what's one more!" Some levels are a bit longer than others, it's true, but none are epically long. I did find all of the levels on World Eight surprisingly short -- but I wonder if they were actually shorter, or if they just seemed that way to me because, by the time one earns one's way to World Eight, one's gameplay must be pretty good.

In general, the game gets more difficult as you go through it, as all such games do. But my experience was that Super Mario Bros. doesn't maintain an inexorable ratcheting-up of the difficulty with each level. I suppose this would be different for everyone, but there were times I'd die multiple times on a level before getting through it by the skin of my teeth (there's a level on World Five that I absolutely loathed), and then the following one turns out to be comparatively easy. Super Mario Bros. seems to be almost set up to make progress pleasurable. I appreciated that after I'd get through a tough level, the next one wouldn't suck the life out of me by being even tougher.

There are a lot of little whimsical touches in the game, like the way the ghosts in the ghost houses cover their eyes when they want you to think they're not watching you, or the monsters who literally throw up big metal balls with spikes on them to toss at you.

The fat guy in overalls gets the girl!

And now...geez, I need a new game or two. Hmmmmm...maybe Super Mario Galaxy. And Star Wars: The Force Unleashed. Or maybe that Lee Trevino golf game that Marge bought Bart for Christmas that one year....
scrawled here by Kelly Sedinger at 5:31 AM

Congratulations Kelly. It's important to have goals and one gets a real sense of satisfaction when one is completed.

Congratulations! I haven't beaten the game yet, but I'm inspired by your example, sir.

Excellent write-up. This is everything I love about this game.

I got too frustrated with it, and then along came Mario Kart Wii... and I've been sidetracked ever since.