Ahhhh, Hell's Kitchen, how I love you. I'm enjoying the doubling-up of episodes this year, even if that means that the show will be finished much sooner than usual. Last week's episodes were full of entertainment:

:: One of the theme nights was a "Family Night" at Hell's Kitchen, which led Gordon Ramsay to point out to his charges that the dining room would be full of kids and therefore it would be nice if they didn't make him swear.

So what happened? The Red Team proceeded to muck things up so badly that Ramsay threw all of them out and had his trust sous chefs finish the service. And if you know Gordon Ramsay, you know he didn't break the news to the Reds by saying, "You have all underperformed, and now I would like you all to return to the dorms forthwith". Oh no.

As he would say a minute later, "So much for me not swearing tonight...."

:: It's not uncommon for Hell's Kitchen to make me hungry for a certain food. That said, I want some crab hushpuppies. NOW.

:: Scott, the endless know-it-all with the unimaginably inflated opinion of his own worth, got tossed out on his ear. He kept saying "None of you work in fine dining restaurants!", as though it meant something. It never occurred to him that since his food was constantly being sent back, since Ramsay was constantly having to yell at him for serving up raw food no matter what station he ran, that maybe he's not as good as he thinks. The guy was utterly, utterly delusional. But he talked a good game for a while, even to the point of getting Fran to not nominate him for elimination. (Ramsay saw through this and brought him up anyway, although he eventually sent Maria packing.)

Of the remaining contestants:

:: Siobhan seems ripe to go. I liked her a lot at first, and I still think she's really cute, but she's over her head in each service, and her results are similar to Scott's. The only difference is, Siobhan doesn't think she's God's gift.

:: Salvatore is not long for the show either, I suspect. He's got talent, but he lacks experience and his confidence has all the rigor of a skyscraper made of balsa wood. He can't go much farther than he has already.

:: Fran has gone surprisingly far. I was actually a bit shocked when Ramsay looked her in the eye a few weeks ago and said, "I can't teach an old dog new tricks." I have noticed over the years that he really does gravitate toward youth (such as a few years back when he chose a young woman over an older guy named Petrozza in the finale, when the two were really about equal in performance). I can't see Fran winning, but I can see her at least making it to the Black Jackets.

:: I can really see Nilka winning, although I know -- from the "This season on Hell's Kitchen!" thing that was part of the first episode -- that she appears to have a hell of a tantrum explosion coming up at some point. Of course, that, in itself, need not doom her. Nilka's got some game, though.

:: Benjamin also has some game, although I was disappointed to hear him start to show some ego and arrogance in the last episode. The humble and confident chefs tend to be the ones who excel on this show. Remember Dave from last year? That guy just shut up and cooked, week in and week out. That's what Benjamin had been doing, too, but now he's been appointed "Possible Savior of the Red Team". That's not going to help his chances. Two seasons ago, another strong Blue performer was sent to a disastrous Red Team to help pull them back together; he was gone two weeks later.

:: Ed? I have no impression of the guy. At all. I don't recall him even being yelled at yet. No read on him whatsoever.

:: Jay also seems a bit arrogant, but a bit quieter about it. He could be the type to reach the finale by outlasting everyone else.

:: Jason also seems to have a bit of skill, but I think he's going to fall apart at some point. He just always seems to have a chip on his shoulder, and that's never going to work out well.

:: Autumn? I don't like her at all. Still. She appears to have some skill in the kitchen, but she's a weasel. I didn't like the way she would screw things up on the Red Team and then find a way to avoid the blame that was hers, and I didn't like how, this past week, she tried to set the Red Team up for failure now that she was on the Blue Team. (One night, each team switched off kitchen and dining room service duties, so one team was waiting tables while the other cooked. Autumn was being really suggestive to customers that she could take their food back and have it re-cooked, she really really really could it was no problem at all. Ugh.

:: And then there's my favorite contestant, the beautiful Holli. And she seems to have some skill as well; she has not yet been in Chef Ramsay's line of fire, and she manages to pretty much stay out of the fray on a Red Team that gets more dysfunctional every week. 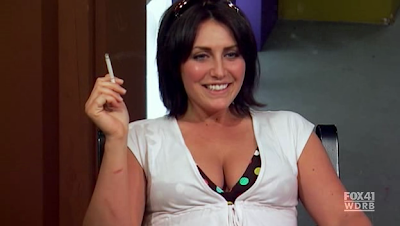 She even manages to look cute when all the chefs are required to wear butchering costumes for a challenge that doesn't even involve butchering! 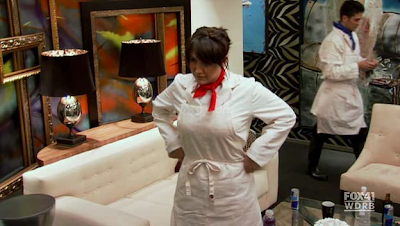 Of course, that episode ultimately irritated me a bit. The Blue Team won a challenge involving using pork as an ingredient, so they all got to go to a spa where they got massages and sat in hot tubs and had mud baths, with lots of nicely lingering shots of the Blue Team members in their spa gear. There was a lot less footage of the Red Team's punishment, which involved dressing up appropriately for the job of washing a bunch of muddy pigs.

Which means that the episode featured a number of lingering shots of Autumn in a bikini, and only a couple of fleeting glimpses of wonderful Holli in overalls. Curse your sudden but inevitable betrayal, Hell's Kitchen! 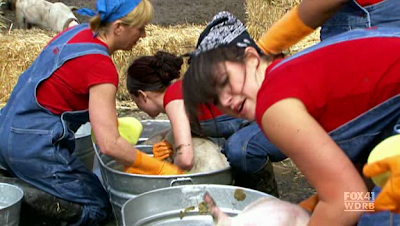 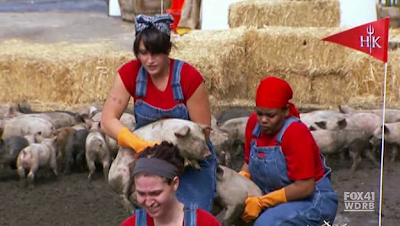 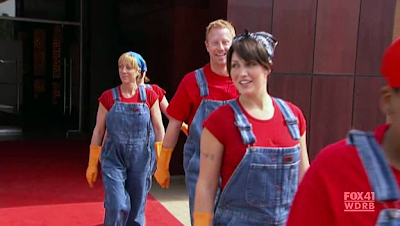 I so hoped that you would write something about Holli in her overalls like I did. She is delicious. If Ramsey would have her cook in a Batgirl outfit I would be totally sold. She is my choice to win because she seems to be the most adult one there. She seems to be beyond the pettiness of many of the chefs. She is also adorable and sexy as hell and that is the kind of person you want leading your London kitchen. Just stay out of his radar girl and you will be okay.

I so hoped that you would write something about Holli in her overalls like I did.

How could I not!

Don't watch the show, but Holli would be seriously cuter sans the cancer stick. It's a tremendous turnoff, and having dated smokers, I know of what I speak...