SamuraiFrog comments favorably on Sean Bean's casting as Lord Eddard Stark in the forthcoming HBO series A Game of Thrones, adapting the first book in George RR Martin's pretty good, but I suspect doomed to eternal incompletion, Song of Ice and Fire series. Bean looks really good in this photo: 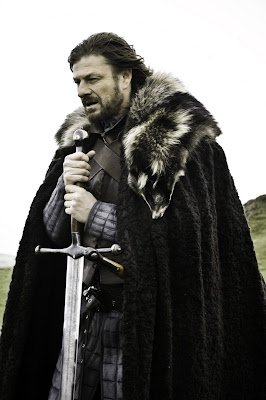 Looking at this pic, I have a new thought: [SPOILER, highlight to read]Maybe after this, Bean can play Uther Pendragon in a filmed adaptation of Mary Stewart's Arthurian books, so he can keep up his newfound habit of playing guys who die in the first books of the series whose filmed adaptation he's starring in.

In other Game of Thrones casting news, the part of Hodor has been cast. Talk about having it easy! (Hodor is a mentally-challenged character who only ever says his own name. That's it. His dialogue will consist of him doing nothing but saying "Hodor". In fact, I have a hope that in the unlikely event GRRM ever actually does finish the series, the book ends with "Hodor," said Hodor.)
scrawled here by Kelly Sedinger at 8:15 PM