I noted a while back that I'd indulged my "crafty" side by doing some tie-dying of shirts for the family, and I should now report on the results. Mostly the items turned out nice, although I see some errors I made in the process that I'll rectify next time I do this. In general, I ended up with way too much "white space" remaining on the finished shirts -- well, more "white space" than I wanted. It turned out that after I twisted the shirts up and bound them with rubber bands, I wasn't aggressive enough in getting the dyes down into the interior of the fabric bundles. The result was a bunch of shirts that have lots of nifty vibrant colors at the outside, and not much in the middle. This was true of all four shirts for which I did the familiar spiral pattern, as well as another on which I did a "random bunching" technique. One shirt, however, on which I experimented with verticle striping turned out pretty well indeed.

(Oh, and once again I discovered how abysmally bad I am at judging sizes for women. I bought the shirts for both The Wife and The Daughter, and both turned out freaking gargantuan. The Daughter will, of course, grow into hers

Here are some photos of four of the items I made.

First, here's the turtlenecked onesie that I made for Little Quinn. I actually like the way this one turned out: it's not too busy, but it'll get the idea across that he's our little hippie kid. 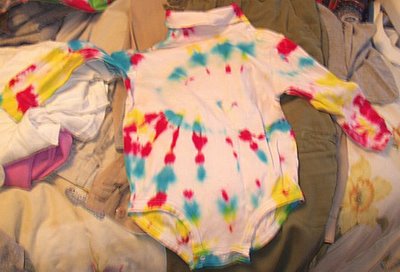 The Daughter's shirt turned out pretty similar to this one, actually, since I used the same basic idea for hers. It's bigger, though. Way bigger. She swims in that shirt. Whoops.

Here's the afore-mentioned "vertical stripe" shirt, which is made by rolling the shirt into a tube-shape and then tying it off with rubber bands at certain intervals. The colors are scarlet and dark green, but the lighting wasn't the best when I snapped this photo, so the green looks more gray here than it really is. You also can't see the pocket on the left breast, but it's there. It's more vibrant than it appears here, but you get the idea: 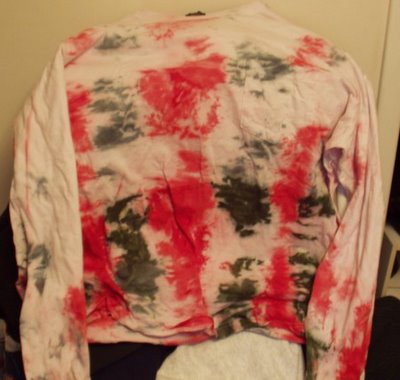 I'm planning to use this one as part of my Christmas "wardrobe" at The Store, although I may add a bit of decoration to it with fabric paints. I'm thinking of a little stylized manger with a Star of Bethlehem above it, maybe in gold. But the red and the green dyes came out pretty well, although the tools I had for those colors weren't the best. (I should have been using small squirt bottles with nozzles, but as I only had three of those and they were in other colors, for the scarlet and dark green I used old Poland Spring water bottles. This was not ideal.)

The next one is a t-shirt I did using a "bunching" technique, where you just crumple the entire shirt into a ball, secure it with rubber bands, and start dying. You end up with a haphazard array of color, as opposed to a definite spiral: 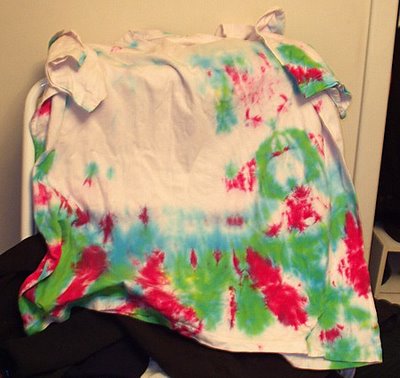 On this one, you really see how I didn't get enough dye into the interior of the bundled shirt, which resulted in great colors in places and one large swath entirely devoid of color in the upper left. But hey, live and learn, right? I may dress that part of the shirt up by writing "Merry Christmas" or some such suitable sentiment, again in fabric paint. (But, just to indulge my geeky side, I may do it in Klingon.)

Finally, I did a sweatshirt in a traditional spiral pattern. Again, I didn't get enough dye into the folds, so the trunk of the shirt only hints at a definite spiral. But the arms turned out really nice, which I like a lot. And now, of course, I can really dress the part for those times when I'm sitting around the apartment in the lotus position: 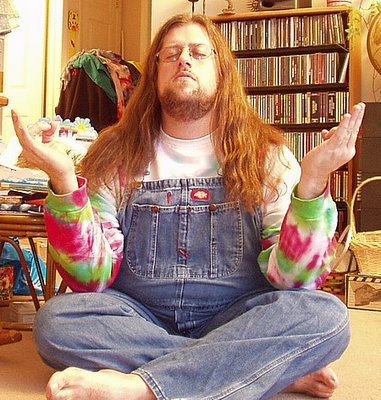 Next week I'll tell you about these really cool plants I've been cultivating...the ones whose leaves turn an ordinary box mix into the best brownies I've ever had, man...whoa....
scrawled here by Kelly Sedinger at 9:23 PM