Flakes, and not the corn ones, either

Here in the Southtowns of the Buffalo Niagara Region, we just last night received our first snowfall of the year: a nice hit of about eight inches or so, in your classic lake-effect scenario.

(For those new to the blog since last winter, the "lake effect" occurs when really cold air blows across the warm, open waters of Lake Erie. The air picks up shitloads of moisture -- "shitloads" being an official meteorological term -- and then dumps its moisture as soon as it hits land. In this area, the lake effect usually sets up "snow bands" where the snowfall is particularly intense, while areas outside the snow bands receive little or no snow at all.)

Here's what it looked like outside our apartment building: 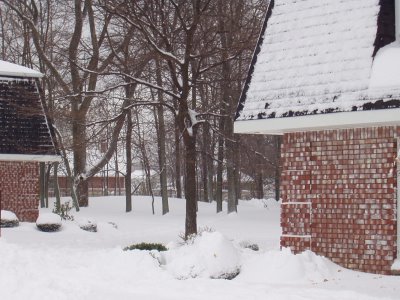 No minor dusting of a paltry inch or two to kick things off this year! Nosiree Bob, we got a nice-sized kick in the pants by Old Man Winter.

This snow posed a fairly large inconvenience for me, actually -- I was close to two hours late for work, because (a) our apartment complex didn't have the groundskeepers out plowing early enough; (b) when a guy in a plow got to our parking lot, he proceeded to get so enthusiastic about plowing out parking spaces that he went right over the edge of the pavement and got stuck in the lawn; (c) when he got unstuck, he sheepishly admitted to us that he was plowing eight inches of snow in a six-cylinder rear-wheel-drive pickup truck. Well, color me confident in the way things are going to go this winter!

Anyway, I finally got myself to The Store close to two hours after I had been scheduled (no worry, they were fine with it, as I'd called them in advance). But in the best Lake Effect Snow fashion, when I got to The Store, the snow falling from the sky was little more than a mild flurry, the snow on the ground totaled less than half of what was at home, and I could see blue sky just a mile or two to the north.

Yeah, that Lake Effect. It's just a pisser.
scrawled here by Kelly Sedinger at 6:00 PM