Between being at work at 4:00 am the last two mornings, and being in at 5:30 am tomorrow, and between writing a way overdue review for GMR and cleaning the apartment for a visitor tomorrow, I just haven't had time for generating impressive commentary for the blog. Hopefully things will start to calm down as the weekend approaches, but lately, I've been the proverbial one-legged man in an ass-kicking contest.

:: OK, this is a cheap shot, but I recently noted this photo of Condolleeza Rice at TBogg: 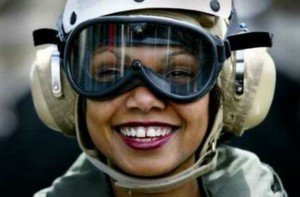 And I have to note that this photo instantly reminded me of this old chestnut of a political photo: 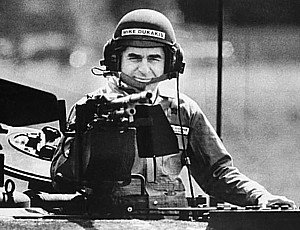 Somebody's got to tell these people to stop playing dressup. You're not fooling anyone -- either if you're grinning like you know how dumb you look, or you're oblivious to the fact that playing dress-up thusly does nothing to give you any national security street-cred.

:: Well, lookie there: JP Losman had himself a good game for the Bills this week. Of course, the standard wisdom in the NFL is that you don't lose your job to injury, but just as before, I don't see this team going on any sort of tear like they did last year. The offensive line is a shambles (the coaches are shuffling the line around halfway through the season), the defense still gives up major rushing yardage, and the schedule is still very tough from here on out. My prescription for the Bills is this: Keep Losman in there; assuming Takeo Spikes is healthy next year, ditch either London Fletcher or Jeff Posey; dump Lawyer Milloy; make Nate Clements the franchise player and then trade him for a number one pick; and then this offseason, sign every moderately priced o-line guy out there and make next year's training camp one big offensive line competition.

:: I've never been big on John Madden (while The Wife positively hates listening to him), but I've noticed two things since he moved to Monday Night Football: I like his chemistry with Al Michaels much more than I liked his chemistry with Pat Sumerall; and without that damned Coach's Clicker thing, he has to rely on normal replays to make his points, which he does very well. I now think that Madden is the gold-standard of NFL color commentators.

:: I see that Target is allowing its pharmacists to refuse to fill prescriptions for birth control, if the pharmacist is of the "pro-life" bent. Via Shakespeare's sister, here's an e-mail one blogger sent to Target on the subject. What I always think of whenever I read about this issue is this: do any of these pharmacists refuse to fill scripts for Viagra?

:: Michael Blowhard doesn't much like listening to music on his iPod:

Someone at iTunes' technical HQ seems convinced that the way to overcome the deficits of severe audio compression is to crank the "effects" dial 'way up. The result is that music listened to on the Shuffle seems to consist largely of weirdly heightened sonic details -- calloused fingers sliding over guitar strings, tiny catches in throats, shimmers on cymbals. Meanwhile, something else -- something crucial -- has been edited out of the mix. I search for the right words: the connective tissue, maybe. The in-between stuff. The impulse that surges through the music. The flow.

Maybe even the music itself. That's more like it: What the iPod delivers is a grabby simulation of music. I find it a remarkably unconvincing one; it leaves me wondering what has happened to the music's spirit, its feeling, its soul. Worse, it leaves me wondering what has become of my own soul. In fact, I find listening to music on the Shuffle a rather upsetting experience.

I don't own an iPod and have never heard one in action, but I too am unsettled by our headlong rush into the digital realm and I too wonder what is getting lost along the way.

:: If you drive around Western New York, you'll see all manner of once-thriving suburban shopping centers (well, OK, quite a few of them never really thrived, per se) that are now pretty much dead as old Marley's ghost. More often than not, these shopping centers were anchored by an Ames department store, before every Ames store closed up show a few years ago. Anyway, I never liked shopping at Ames -- it always felt like what K-Mart would feel like if it was staffed and frequented by the denizens of a George Romero movie -- but apparently these folks liked Ames just fine.

:: This was going to be this week's Image of the Week, had I got round to posting it, so here it is anyway: it's a photo of floating candles in a Thai festival. 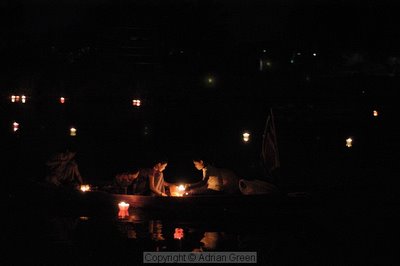 A very gorgeous photo of air-borne candles appeared in The Buffalo News the other day, but I was unable to find the photo online anywhere, so I chose this one.