I can't remember where I saw this first, but I found it very striking. It's a representation of the Golden Gate Bridge that tabulates the locations of all the known suicides that took place there as people lept from the bridge into San Francisco Bay. 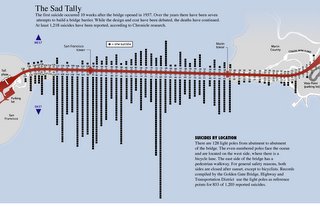 The picture appears in "Lethal Beauty", a series of articles from the SFGate about suicide on the Golden Gate Bridge, which some consider to be the "Suicide Capital of North America", from the numbers they've been able to generate. I read all of these articles in a single sitting; they constitute some of the most compelling, and sad, reading I've found in a long time.

I'm not sure why I found this series so engrossing. Suicide has not, to my knowledge, touched my family in any real way; no one I know personally has committed suicide although some people I know at work have had suicides close to them in recent months. Part of it may be because I live close to one of North America's other suicide capitals, Niagara Falls. (In fact, I wonder if the actual numbers would put Niagara in front of the Golden Gate, if such numbers were available. Not that it matters, really; being "Suicide Capital of North America" isn't really something to embrace, obviously.) The mechanics of committing suicide at Niagara Falls are similar to that of committing suicide at the Golden Gate, although the odds of inadvertent survival at the Golden Gate are better than that at the Falls (where only two people are known to have made the plunge and survived, outside of the barrel daredevils -- and one of those was a kid who fell in the Niagara River, and thus wasn't even a suicide).

:: One of the articles draws a distinction between American attitudes toward suicide and European attitudes. Apparently in Europe suicidal depression is regarded as a serious, and treatable, medical problem, whereas Americans tend to assign more of a stigma to depression, which may partly explain why American suicide rates are significantly higher than Europe's. This seems to hold some water: it's well known that whenever someone is threatening to jump from a tall building, people below are often shouting "Jump! Jump!"; in fact, the man who last year survived going over Niagara Falls was egged into jumping into the water by a passerby. The phrase "drinking the Kool-Aid" has been adopted as an American reference to what is believed to be irrational belief in something, but as everyone hopefully knows, the phrase refers to an instance of mass suicide. Americans tend to view depression as just a bad mood of greater intensity, and it is thus often greeted as something that can be overcome fairly easily. "Just cheer up!" is the frequent response. This leads to a fairly glib attitude toward suicide:

:: Another of the articles identifies North America's number two destination for suicides as the Bloor Street Viaduct in Toronto. I've driven over that bridge, and underneath it, a number of times (it spans the Don Valley, a fairly deep ravine east of Downtown Toronto). This bridge is a case-study for those who would have the Golden Gate Bridge be fitted with a suicide barrier; since the construction of a barrier on the Bloor Street Viaduct, the bridge has been the site of zero suicides.

:: The main argument against building a suicide barrier on the Golden Gate Bridge (aside from the appalling argument that it would be ugly) seems to be the idea that if people are really bent on committing suicide, they'll just go somewhere else to do it. Apparently this is not true:

In Toronto, public opinion was mixed, and opponents voiced concern that building a suicide barrier at the Bloor Street Viaduct would only divert jumpers to another bridge. Among the material presented to the Toronto council was a study concerning two Washington, D.C., bridges, the Duke Ellington and the Taft. The structures were a block apart, but the Ellington bridge was the favorite of the suicide-prone. When a suicide barrier was installed on the Ellington bridge in 1986, suicides there stopped, and the rate of suicide at the Taft bridge did not increase.

:: The vast majority of suicides at the Golden Gate are locals.

:: Those who choose suicide by jumping from the Golden Gate Bridge into San Francisco Bay under the assumption that it is less gruesome a death than, say, jumping from a high building onto the street are terribly, terribly wrong:

The impact is tremendous. The body goes from roughly 75 to 80 mph to nearly zero in a nanosecond. The physics of inertia being what they are, internal organs tend to keep going. The force of impact causes them to tear loose. Autopsy reports typically indicate that the jumpers have lacerated aortas, livers, spleens and hearts. Ribs are often broken, and the impact shoves them into the heart or lungs. Jumpers have broken sternums, clavicles, pelvises and necks. Skull fractures are common.

Which means you die one of two ways, or a combination of both. One, you hit the water and the impact kills you. Sometimes the jumper is knocked unconscious. Other times, the jumper survives for a time. The person can be seen flailing about in the water, trying to stay afloat, only to succumb to the extensive internal bleeding. Death can take seconds or minutes. Two, you drown. You hit the water going fast, and your body plunges in deep. Conscious or otherwise, you breathe in saltwater and asphyxiate.