One of my favorite installments of The Far Side was the one set outside the Midvale School for the Gifted, where the foreground had a large sign giving the school's name, and in the background is a student pushing hard on a door marked "Pull".

Naturally, this cartoon lept to mind when I saw this: 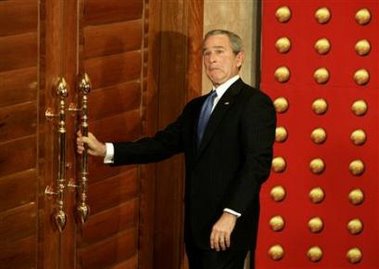 Apparently the President was annoyed by some reporters (you know, the folks who ask questions and stuff -- it seems they still have those in other countries), and after trying to cut off the questioning and making his exit, the President discovered that the doors were locked.

The look on the President's face just made my day. That it is this President looking dumb is just gravy; I love it when Presidents of all political persuasions look silly.

(While I'm loath to track down and post an actual copy of the Gary Larsen cartoon in this space, I did find a reasonable simulacrum thereof here, along with a bunch of other goodies that I hadn't seen before. Oh, and the original item is via MeFi.)

UPDATE: Atrios has the entire sequence of photos. God, this is hilarious.
scrawled here by Kelly Sedinger at 6:09 AM