Twenty-two years ago or so, I sat amongst my fifth-grade classmates and watched, on television, the maiden voyage of a spacecraft. 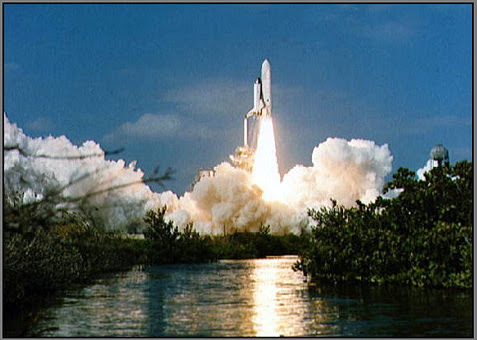 This morning, I sat with my three-year-old daughter and watched that ship's final landing.

This was no automated spaceprobe, vanishing into the interplanetary vapors just as it's supposed to be entering Mars orbit; nor was it an old, outdated communications satellite no longer used by a company that no longer even exists being allowed to burn up in the upper atmosphere without so much as a notice for the general public. This was a spaceship, containing live astronauts -- people for whom the sense of wonder and adventure and exploration of space travel far, far outweighed the ever-distinct possibilities that they might not survive the trip. Today, even as the forces of war muster and as our earthly concerns consume our attention, we mourn seven people who flew with the spirit of Magellan and Erickson and Columbus and Armstrong and who, in doing so, joined the spirits of Grissom and Chaffee and Resnik and McAuliffe.

I pray that in days to come we do not seriously entertain the notion that to reach for the stars is too dangerous an enterprise. I pray that we do not allow three years of investigations and bureaucratic wranglings pass by before we once again take to the heavens. I pray that, faced with the lessons of this terrible event, we do not embrace the fears made all the more real by what happened today but rather take our inspiration from the seven souls lost.

We have to investigate what happened. We have to know why Columbia failed as it did. We have to know what we can do to make our future flights successful. But we must not decide not to undertake any more flights. I envision all the ships littering the floors of all the seas, and yet still we sail. I envision footprints upon the Sea of Tranquility, waiting to be joined; I envision Olympus Mons, waiting to be climbed. And I envision the Voyager craft, carrying evidence of our lonely little species out beyond the Sun's gravity and into interstellar space.

It will be hard, and our first launches in the future will be tempered anew by our freshened fears of the possible fates awaiting those astronauts. But we must keep going into space. As Alfred Bester might say, "The stars, our destination."

Roll on, Columbia, roll on.