I popped over to the FSM message boards just to see what was going on, and someone posted this slice of nostalgia: 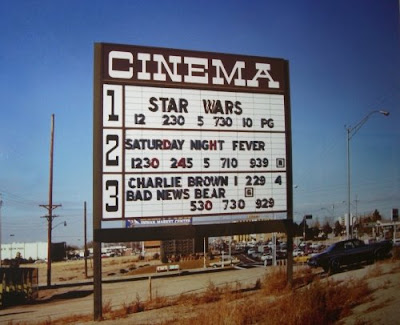 How cool is that! I assume that the Charlie Brown movie is Race For Your Life, Charlie Brown, which I see was released less than two weeks after Star Wars in 1977. I've never seen that one, but still -- that's a pretty impressive slate at the theater, isn't it?
scrawled here by Kelly Sedinger at 8:51 PM

Race For Your Life I remember being really excellent - second only to the Christmas Special itself - but my memory's almost certainly clouded by nostalgia.

Oh yes Charlie Brown the guy who brought depression and self loathing to the forefront of childhood. Redemption is found only when the group accepts you even if their motivation is pity. Then there is Lucy the self absorbed, mean spirited, vile bitch who is for some reason is portrayed as a sage even going as far as setting up her own psychiatric facility. Snoopy who owes his livelihood to Charlie brown nonetheless turns his back on him in times of need. He is rewarded for his out of control ego and Joe Cool the alpha male is a national celebrity. He is further indulged as we laud him for making up service to a foreign country in WWI.

Charlie finds little if any support from his own family. His sister’s vanity is nauseating. Poor Linus is chastised for being repelled by her obnoxious advances. He is then cast as a freak for trying to induce some imaginative thinking to this motley crew he calls friends. Pig pen, obviously from a lower economic run is ostracized for his lack of hygiene. As if compulsive washing is the number one virtue man can attain. Schroeder is only spared the fate of Charlie and Linus because he has a freakishly high aptitude for playing the toy piano. His fits of rage at any who question the brilliance of Beethoven indicate a personality disorder that is ignored as he appeases the group with unquestionable service..

Come on kids, I got something to share with you from my childhood.