UPDATE: Welcome, readers of Boneville, and thanks to Jeff Smith for the link. 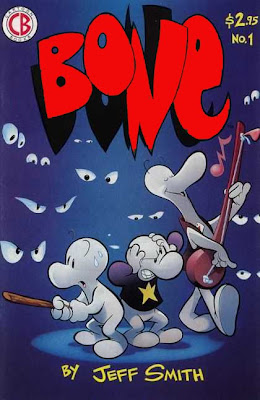 I've seen Jeff Smith's name mentioned a lot in comics circles as being a highly-admired artist and writer, but I hadn't read him much at all except for his recent Shazam! miniseries (which I reviewed for GMR back when). Smith's most famous work to date is his gigantic opus Bone, which I'd held off reading for a while. The first time I heard of Bone was in the comics essay in one of the Year's Best Fantasy and Horror volumes about ten years ago now; the writer made the first of many comparisons I've seen over the years of Smith's work to Tolkien's. Well, that is certainly high praise.

But when I looked into a volume of Bone back in 2003 in the library, I remember being confused. I open to the first page and see, instead of epic fantasy goings-on, a trio of characters wandering through a wasteland. The characters are...well, they're hard to describe. Pasty-white, doughy folk. Short. It looked like, well, the Pilsbury Dough Boy and two of his friends wandered off for an adventure. Tolkien? Bone? Not so much. Maybe it was a great book, but...I wasn't going to find out right then.

Well, years go by, and I see more and more reference to Bone in reverent tones, with more comparisons of the book to Tolkien. Now I was finally intrigued, although I still didn't read the book; but when I read Smith's afore-mentioned Shazam!, I was highly impressed with Smith and decided that it was finally time to look into Bone. A little while after that I'm in a local bookstore and spot individual volumes of Bone priced cheaply ($9.99, I think), and picked one up. Then I forgot I owned it, as I do with many books I buy. I only read that first volume of Bone, Out From Boneville, a few months back, and I enjoyed it so much – it won me over in the first ten pages – that I soon tracked down the rest of the series in the enormous, single-volume edition.

When I say "enormous", I mean just that. Bone runs for more than 1300 pages. (That single volume edition retails at around forty bucks, but that's when I tend to use those 40%-off-any-item coupons that Borders sends me once in a while. It's the best way I know to make comics affordable. As I've noted before, I tend to think that price point of individual volumes is one of the major factors that keeps comics readership lower than we all know it should be.) And yes, it turns out that this is a comic of truly epic scope, even if it doesn't feel epic in its first few chapters. Bone's epic quality sneaks up on you, and there's the big way in which Smith's opus mirrors Tolkien's: the story starts out quite small indeed, and gradually becomes bigger and bigger and bigger over time until we realize that our heroes have stumbled into the middle of an ancient struggle that is about to climax.

The story opens with three "Bones" wandering in the desert: Phoncible P. Bone (otherwise known as "Phoney Bone"), Smiley Bone, and the one who will turn out to be our main hero, Fone Bone. They're known as "Bones" because they hail from "Boneville", a locale we never see. They have been kicked out of Boneville because one of Phoney Bone's get-rich-quick schemes has gone awry. Never fear, though: Phoney Bone is always ready with a new get-rich-quick scheme, much to the chagrin of the sweet-natured Fone Bone and much to the amusement of Smiley Bone, who finds mirth in nearly everything. Soon the Bones are separated, however, and Fone Bone finds himself stranded and alone in a dark and mysterious forest populated by talking insects, giant furry beasts called "Rat Creatures" who are menacing but not-terribly-bright, a dragon whom apparently only Fone Bone can see, and a girl named Thorn and her protective grandmother. Fone Bone follows Thorn to the little farmstead where she lives, and little by little finds himself drawn into various intrigues in this forest, where all is watched by a menacing figure who seems to be directing the Rat Creatures for some nefarious purpose.

Along the way, Fone Bone develops a crush on Thorn and bores everyone around him by obsessively discussing his favorite book (Moby Dick); he runs afoul of too many of Phoney Bone's schemes to remember; he runs afoul of a giant cat whose allegiances are unknown; he runs afoul of hidden perils called "Ghost Circles"; he travels into ancient shrines and ancient cities and finds himself in the middle of ancient wars.

Bone is really something special. It is long and epic, but also poignant and intimate and familiar. The characters' motivations are never unexplained or inexplicable, and much of the conflict is character-driven. There are sad moments and laugh-out-loud funny moments, and Jeff Smith ties it all together with wonderful art. Originally the series was done in black-and-white only (and that's how my single-volume edition is), but the smaller re-issues have been colored beautifully under Smith's direction. I prefer the B&W because it is (a) original and (b) cheaper. Bone is seriously wonderful stuff.

Smith's most recent comics work is an ongoing series called RASL. This is an ongoing series which Smith is apparently self-publishing. It's a science-fiction story that is aimed at mature audiences (which is a strong consideration after Smith's earlier appropriate-for-all-ages Bone and Shazam! work). I've only read the first volume of the graphic novels that are collecting it, so I don't have a strong impression of RASL yet. But it's a surprisingly dark and violent tale featuring an art thief who travels between dimensions using this gigantic gizmo he wears on his back. The book is hard to describe, and while I found it intriguing, I also found it hard to evaluate based on the little that is printed in the graphic novel edition. I'll probably wait however long it takes Smith to do RASL in its entirety before I really dig into it.
scrawled here by Kelly Sedinger at 8:42 PM