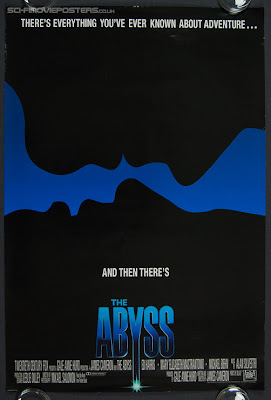 I've written on The Abyss before, but I just watched it again a little while ago, and if anything, I love it even more. This is one of those movies that gets better each time I watch it. I genuinely believe it's an underrated classic, overshadowed by the films in James Cameron's oeuvre that bracket it: Aliens (which I don't like) and Terminator 2: Judgment Day (which I consider classic).

For those who haven't seen The Abyss: it's set in the late 80s, before the end of the Cold War. A US nuclear submarine is cruising near an extremely deep trench in the Caribbean (the titular "abyss"), when it's buzzed by some kind of underwater phenomenon that travels extremely quickly with astonishing maneuverability, and which interferes with whatever electrical systems it comes near. Is it some kind of Soviet weapon? Or something else? They don't find out, and the sub is caught in the turbulent wake of the "bogey" just as its electrical systems all go haywire, meaning that the sub can't avoid crashing into the walls of the trench. The sub goes down, eventually coming to rest a couple of thousand feet down, flooding and killing all the sailors on board, but not before they can launch their log buoy.

So a recovery mission is launched. The problem is that the Navy can't get its recovery equipment and vessels into the region before the hurricane that's on its way will get there, so they recruit the crew of an experimental undersea oil drilling platform, "DeepCore", (referred to throughout the film as "the rig") to do the job of inspecting the sunken sub. A team of Marines are sent down to the rig to help, and of course, the Marines don't get along terribly well with the oil workers who populate the rig; and the Marines are accompanied by the rig's designer, the alpha-female Lindsay Briggman, who happens to be the estranged wife of the rig's foreman, Virgil "Bud" Briggman. Hilarity ensues as the hurricane on the ocean surface results in great damage to the rig under the sea, as Bud and Lindsay battle one another, as the Marines execute their own orders without telling anybody else, and as the commander of this bunch of Marines starts to show signs of underwater psychosis. Add to that a race against time as the rig is cut off without its replenishing oxygen supply, the strange underwater bogeys that may or may not be aliens, and the nuclear menace when the Marines' secret orders turn out to involve removing a warhead from the sunken sub.

(You know, I'm not sure they're Marines. Navy SEAL's, perhaps? I don't recall. Yeesh. And I just watched the movie.)

Anyhow, I've never understood why this movie doesn't have a better reputation than it does. Not that its reputation is bad, mind you; my general sense is that it's well-regarded, but it wasn't really embraced by the general public. One reason is probably the theatrical cut of the film, in which the role of the undersea aliens is a bit reduced, and in which one of Cameron's main subplots, the Cold War tensions being exacerbated by the rescue operation in waters very near Cuba, was completely cut from the movie.

That's not entirely a bad thing, since while I do think the Director's Cut is better than the theatrical cut, it's not across the board better. The problem is that James Cameron has never, not once, been a filmmaker who counts subtlety among his bag of tricks, so the Cold War stuff is driven home hard, hard, hard. We see news reports highlighting the events between the US and the Soviet Union, which is all well and good, except that Cameron also throws in some odd "Joe Citizen" interviews in which supposed people on the street say things like "Geez, the Russians love their kids too, so why are we doing all this?" This stuff doesn't work very well, and more on some other problems with the Cold War subplot in a bit.

What really works with this movie – really, really works – is the creation of a complete setting that is totally believable, filled with details that feel totally plausible. To my knowledge, there's nothing at all like Deepcore anywhere in existence, but the movie has extensively thought out what such an undersea drilling rig would be like and what life would be like for the men and women working there, with the result that the setting works. That's worldbuilding, in the best sense of the word. Everything looks real, like it has a purpose. Everything clanks and clunks like metal on metal; the ceilings and walls are covered with pipes that constantly drip water in various places; the place is cold and dark and dank, and yet the people who work there consider it home, and they live in the place with an eerie acceptance of the awesome pressure of water all around them. There's also a keen sense of family among the cast: the crew of the Deepcore rig really do seem to have been working together for a number of years. They know the same songs, they share the same in-jokes, and they speak to each other in the kind of shorthand that only people who have worked in close quarters for a long time can do.

The film draws much of its tension from the claustrophobic settings of the rig, which are made even more claustrophobic by the fact that they're a mile underwater. There is also palpable sense of fear, both fear of the unknown and fear of the possible nuclear disaster unfolding. There are a number of very finely-done action sequences, foremost among these being a chase sequence involving two submersibles. And the movie also features one of the more creative riffs on the "defuse a bomb by cutting the correct wire" meme I've seen.

The music is by Alan Silvestri. It's mostly a serviceable score that doesn't really call attention to itself, but like most Silvestri scores, it's got some nice ideas and fine moments.

What don't I like about the movie? Well, the ending always feels like a small let-down. In the Director's Cut, the entire last act ends up feeling not unlike The Day the Earth Stood Still. It's mostly effective, but again, Cameron's lack of subtlety actually harms things a bit, when he chooses to drive home the film's anti-nuke message with all the delicacy of a brick thrown through a plate glass window. Still, I'm always deeply touched by the aliens' final reason for not causing the seas to wipe the Earth clean of the human menace. (And, to be frank, the visuals in the film's very last scene always look fake to me. I wish they'd have found a better way to shoot some of what happens at the very end.)

Tiny quibbles, though. I watch The Abyss once every year or two and it always feels fresh and exciting to me. It's a terrific movie that should have a higher reputation than it does. I consider it a modern SF classic.

EXTRA NOTES: I'd never seen the poster art above until I Googled about a bit for an image to use for this post. I like that image, a lot -- the blackness surrounding the deep blue of the dark water, forming the profiles of the man and woman. Cool poster! Image taken from here.

Also, back when I was doing Unidentified Earth posts, I had a location I was going to use but never did, because I figured nobody would get it. But it's really cool. The underwater scenes for the movie were filmed in the containment building of an unfinished nuclear power plant near Gaffney, South Carolina; they actually built a scale set for the DeepCore rig and then filled the containment building with water around it. It turns out that the DeepCore set has never been dismantled, and can still be seen there...and on Google Maps's satellite images. Here is the location: 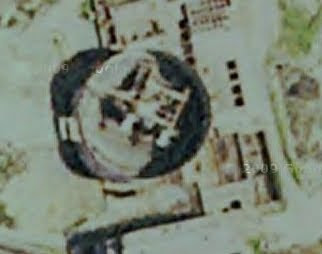 And here are some photos taken by a couple of folks who actually hiked onto the site to see the abandoned set.
scrawled here by Kelly Sedinger at 5:46 PM

The novelization of the movie was done by Orson Scott Card. He did some excellant backstory on the back ground of the Nutty Navy seal to give depth why he was they way he was. Also he fleshed out the titanium wedding ring story which was an important plot device in several parts of the movie.

BTW: the opposite of abyss is byss (old english)

Ah, now here's a movie you and I agree on! I too love The Abyss. I was working at a multiplex when it came out and thought it was the best flick we ran that summer; I've always thought it was unfair that it went relatively unnoticed. (It was a hell of a summer, though; lots and lots of good movies that year competing for attention.)

For what it's worth, I think the military guys were supposed to be Navy SEALs. I agree that the environment of the movie -- the DeepCore in particular -- is utterly convincing. I think the scene of the two subs chasing each other around the bottom, ending in Michael Biehn's death by implosion, is one of the most suspenseful sequences ever filmed, and the following scene when Bud lets Lindsay drown and then tries to bring her back is one of the most harrowing. (I actually have trouble watching him give her CPR; it's a bit too real-to-life for my comfort, and brings back some things I'd rather not remember.)

Forgive me, I'm just gushing here. I'll just say thanks for writing this, it's good to meet a fellow Abyss fan, and thanks especially for the link to the photos of the abandoned set. I always assumed it was disassembled after the movie; strange to see it rusting away in the real world...