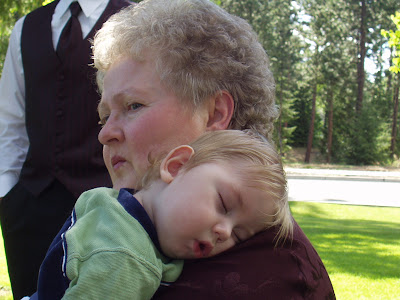 In summer of 2005 we traveled to the Coeur d'Alene, Idaho area for my sister-in-law's wedding. This photo is Little Quinn on the wedding day, asleep on his grandmother's -- The Wife's mother's, my mother-in-law's -- shoulder. This was taken at a very pretty park where the wedding photos were taken.

Over the last year, my mother-in-law became ill. She endured many treatments, lost a lot of weight and a bit of hair, but still mostly kept her spirits up. The Wife talked to her mother just two days ago.

But the end came this morning, very shockingly and very suddenly. She was only sixty years old.

Obviously, we're making arrangements to travel now, so blogging will be intermittent for a while. I'll have the laptop with me, but other than that, who knows.
scrawled here by Kelly Sedinger at 3:04 PM

Sorry to hear this, jaquandor. Condolences to the Wife, and safe journey.

My condolences to you and the rest of your family. Wonderful photo, by the way.

Oh, I'm so sorry to hear. May her Memory be Eternal and safe travels for you.

Be safe. May your memories be a comfort to you. What a treasure that photo is!

My condolences also. And add one to the "wonderful photo" crowd.

What a terrible shock. I'm so sorry. My condolences to The Wife and you and the rest of the family.

So sorry for your loss. My condolences.