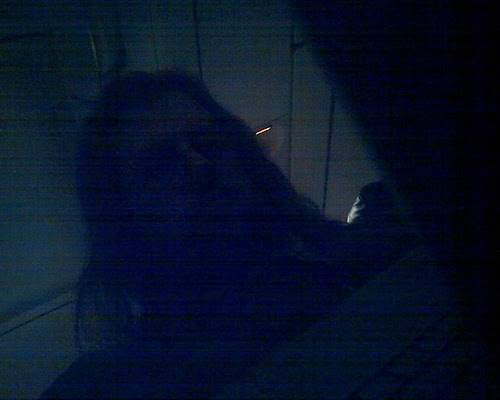 44 minutes, out of six hours...., originally uploaded by Jaquandor.

Yeah, it's a crappy photo. I took it with my phone while watching the episode on my laptop when we were approximately 25000 feet in the air, winging over Indiana or Illinois or one of those states somewhere in the middle, between Boston and Phoenix. Not the best logistics for watching this show, either: my laptop isn't one of those small laptops, and the guy in front of me insisted on reclining his seat, so I had to tilt my computer so the screen was on my lap and the keyboard was against my chest. But I wanted to see what happens next, so I sucked it up.

As for the plot machinations, I was sad to see Tony's bad-guy ally bite the dust, as he was an interesting character, if villainous. Could they be sowing the seeds of another fall from grace for Tony Almeida somewhere down the road? And how will the First Husband get out of the mess he is in, since there are two bodies in that apartment now that have his fingerprints all over everything, even if we know that he's innocent of their murders? Did I miss it, or was there an explanation of just how Bill and Chloe, Jack's CTU compadres, just happened to have handy some clothes to give to Agent Walker, now that her old clothes are all bloody? How long can it be before the Bob Gunton character is revealed to be the bad guy? (Because Bob Gunton is always the bad guy, which kind of stinks because Bob Gunton is one of my favorite character actors working today and I'd love to see him in a role where he's not the jerk or bad guy. The best he's had, in a memorable episode of Star Trek: TNG, was a good guy who'd gone horribly awry due to emotional trauma.)

What I'm really thinking about in this picture, though, is how I'm sitting there in a passenger jet watching an episode of a teevee show in which the terrorist bad guys make their point to the President by using their techno-gizmo to hijack the nation's air traffic control system and crash two passenger jets together in mid-air, killing everybody and making a nice big fireball in the sky that's visible from the Oval Office window. This kind of made me think of the scene in Airplane! where the in-flight movie starts off with a depiction of a very fiery plane crash.

If I ever go on a cruise, I'm watching Titanic.

Here's what my husband and I want to know about this season:

Why did Tony help these guys get the CIP device? Okay, I get it, he was undercover, he had to play along so he could ultimately... Get the CIP device back? WTF? If he just hadn't given it to them in the first place, none of this would be happening.

Why exactly does the attack on Sengala have to happen today? Why can't the president agree to the demands, stand the army down temporarily to buy time for the FBI, and then attack, say, tomorrow?

Why do they want Prime Minister Matobo alive? Everyone including the president agrees there's no point in attacking Sangala if he's not around. Matobo and Dubaku don't want the US to attack. They've had opportunities to kill Matobo. Why haven't they?

There's plenty of other stuff that doesn't make sense, but this drives us the most nuts.

I meant "don't read if you haven't seen this episode yet" BTW. I keep checking back to see if you share my outrage or if you have some defense for this season's plotting or you're just going to say "Lighten up, it's just TV," but I think I may have given the impression that I was revealing things about future episodes...