"That was the day I stopped believing in the wild ardor of things." 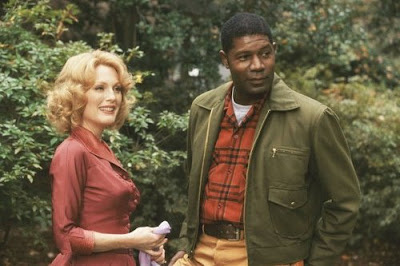 I knew nothing about Far From Heaven when I checked it out from the library other than it boasted a highly-regarded score by Elmer Bernstein which was nominated for the Academy Award the year it came out. (That score was favored to win by most film music aficionados, but it didn't. It was also the last nomination, and last score, of Bernstein's career; he died less than a year later.) I knew that the movie was highly regarded, but I knew nothing more than that. So I decided to see what it was all about.

The film takes the form of a 1950s melodrama, but with a much more modern sensibility attached to it. Julianne Moore plays Cathy Whitaker, a housewife in Hartford, CT, where she maintains a perfect home and an equally perfect social life for her husband and their two children. She fancies herself quite the modern woman, sensitive to liberal concerns while also living the staid and conservative life of the fifties housewife who meets her husband at the door after work with drink in hand and who is constantly thinking of what the other ladies think of her and her family life.

One night she has to go downtown and bail her husband out of jail, for some kind of embarrassing thing that's happened; like any good 50s housewife, she doesn't inquire too deeply into the incident, trusting her husband's word that it's all a misunderstanding that will come to nothing. But a little later, we follow him on a night when he's working late. He leaves his office and ends up going to a secret bar, one of those down-an-alley and through three doors kinds of bars; if we're wondering what kind of bar needs to be secret in 1950s America, we quickly learn soon enough: a gay bar. Frank Whitaker is gay.

Soon enough she discovers this, and they embark on a series of psychological treatments designed to "cure" him of his homosexuality (remember, this is the 1950s); and meanwhile, Mrs. Whitaker begins to form a close friendship with the family's gardener, Raymond Deagan, who is a tall, strapping, handsome black man (played by Dennis Haysbert). So the movie gives us not one character but two who become involved in impossible (for their time) romances. Sadly, while Mr. Whitaker's homosexuality is allowed to remain secret, Mrs. Whitaker's friendship for the gardener becomes common knowledge. And there's no real escape for them, either; when the gardener takes Mrs. Whitaker to a local "black restaurant", her reception there is about as friendly as his would be at a local "white" restaurant. Later, he bitterly comments that their relationship is the only thing and whites and blacks apparently have between them in total agreement.

Yes, this is a sad movie; there's no way to sugarcoat that, and in many ways the film ends with no real note of resolution at all. But it's a pretty noble movie, well-written and beautifully acted; there are moments where emotion is conveyed simply by the non-speaking actors in the way they look at one another. The film's look is also excellent; designed to look like a fifties melodrama, the film's color schemes are bold and bright, and even the opening credits are done in that style, with the titles displayed in very large letters that take up the entire screen and which fade into one another while the music swells. The film is awash in color, with many shots that linger; the gay bar, with its muted green lighting that makes it seem just a little otherworldly, for instance, or in the way Raymond Deagan's clothes tend to match the color scheme of the Whitaker household, suggesting that he belongs where he really doesn't. And that Elmer Bernstein score is truly beautiful, elegiac and tender.

Far From Heaven is an outstanding film.
scrawled here by Kelly Sedinger at 12:10 PM

Saw this in the theater. LOVED this movie.

Great review, it IS an excellent film. And I love you highlighted that amazing quote, which I actually took and used for the title of my blog - The Wild Ardor of Things.