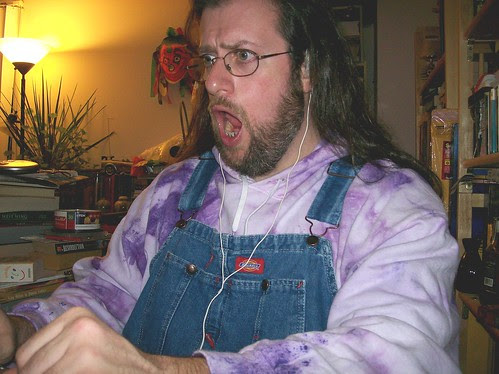 Watching 24: 8 am to 9 am, originally uploaded by Jaquandor.

I'm actually watching 24 this season, after I missed the last three seasons. The reasons I missed those seasons are mainly logistical: the timeslot is tough, since that's when The Daughter's bed time is. And yes, I could tape it and watch it later, but it's hard in this household to find time to watch taped shows (especially ones like 24, which aren't terribly appropriate for children), and FOX has been launching each season with four episodes run over two nights, which puts me in a big hole anyway. I tried following Season Four this way, but I quickly fell behind and dropped out.

Now, though, I can follow along by getting the episodes online and watching them on my laptop, with the earphones on, so it's back to following the adventures of Jack Bauer! Hooray! And now, I'll depict my progress throughout this season by posting a snapshot of me reacting to each episode's events. This is me reacting to the big reveal in the first hour of this season: Tony Almeida's alive and he's a terrorist now?!

The bonus for me from this one was checking out all the OTHER shots in your Fickr stream that this took me to. I can't believe how big your daughter is now. I still think of her in her tutu. I particularly liked the autumn foliage pics. And the jungle gymn for goats was very inventive!