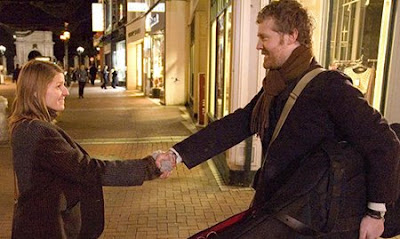 "Take this sinking boat
and point it home.
We've still got time...."

-"Falling Slowly", song from Once

A vacuum-cleaner repairman in Dublin works on the side as a street musician, playing his guitar and singing his songs on the streetcorners for whatever change he can get from passers-by. Occasionally he does well, other times he does less well. He has to contend with the occasional thief who tries to run off with his guitar case and the money inside it, and he has to refrain from singing his own songs for night-time when foot traffic is lower, since most people are more rewarding of a musician playing songs they know, this even though his performances of his own songs are searingly emotional. There's something eating away at this guy, though; we can see it, although we don't know what. He looks young but weary, idealistic and cynical at the same time; his guitar is so old that it has a second hole worn through its face and the strings are not neatly trimmed but have lengths that dangle off the ends of the frets. He wears a black overcoat and a scarf tied around his neck, even oftentimes when he is inside.

Along comes a young Czech woman who also works the streets of Dublin, selling her own wares: magazines, individual flowers. She hears one of his songs at night, and compliments him; he is trying to end the conversation when he lets slip that he's a vacuum cleaner repairman, and her face lights up because she has a broken vacuum cleaner! She vows to bring her broken cleaner to him tomorrow, and she does. They then begin a brief friendship that deepens quickly into love as they walk the streets together, him carrying his guitar and her pulling the vacuum behind her like a dog. She seems more open, more willing to smile, more idealistic than cynical, but it soon becomes clear that she is masking her own series of hurts as well; there's a sadness in her eye that she hides except for when she thinks no one is looking, she has a two year old daughter with no father in sight, she buys her clothes at a cheap mens' store, and she too spends much time wearing a heavy overcoat with a scarf round her neck.

It turns out that she is a piano player too, although she keeps that part of her life carefully secret, only playing an hour a day in the studio of a music shop while the owner closes for lunch. She offers to play for him there, and he goes to hear; after she plays him some Mendelssohn, she asks him to play, and he does, to her accompaniment, teaching her one of his songs. He seems slightly skeptical of this whole thing, until she begins to sing along with the lyrics he's placed in front of her, harmonizing his own vocals. He smiles in pleasant surprise; he's made a connection with this woman, a musical connection, the kind that comes when we discover entirely by accident that someone we've just met is, on at least one level, completely in tune with ourselves.

Is that when they fall in love? I'm not sure. But it starts there, with that smile of surprise and delight. It happens early in the movie Once, about twelve minutes in, and the rest of the film follows the guitarist and the pianist through the next few days as they get to know each other and to love each other and to make music together. (The scene is helped by the fact that the song, "Falling Slowly", is a wonderful song that would eventually win an Oscar for Best Original Song.)

The feel of Once is very similar to Before Sunrise, another great romance film about two people in similar circumstances who find each other and get to know each other over a fairly short period of time. Here it's a few days, but it's still fairly brief. There is a girl in his past, and a husband in hers; both lean on the other in efforts to deal with their respective pain and find their ways to their respective next steps. Those steps make sense, in the end, and if I found myself hoping for a different outcome, the one the film depicts is still moving and satisfying and right.

A movie like this can't possibly succeed unless its performances are good, and there's not a false note of performance in the entire movie, from the leads (who are never named; the credits list them as "Guy" and "Girl") all the way to the jaded soundbooth operator who first thinks he's recording a bunch of yahoos but soon realizes different once he's heard the songs. The leads are played by Glen Hansard and Markita Irglova, who have paired as a singer-songwriting duo, penning some of the songs used in the film. And the film's songs, by the way, are really very good, with one, "Falling Slowly", being a truly excellent song indeed, the best movie song I've heard in years. This song won the Oscar last year for original song, and this was richly deserved. (And I cited it as my song of 2008.)

Once is a beautiful, beautiful movie. This is what movies are for.
scrawled here by Kelly Sedinger at 8:52 AM

I've been meaning to rent this movie -- thanks for the reminder!

I thought it was interesting that with all the press these two got last year, I never once saw it mentioned that Glen Hansard was in one of my favorite movies from the 90s -- The Commitments!

Some think movies are for education orrrrrrrrrr
just plain old
SHOOTIN' BACK, i.e.