Wow, tonight's episode of My Name Is Earl has a strange opening, doesn't it? Instead of opening with Earl in the hotel room or in Crabman's bar, we've got...some guy, sitting in an office, talking right into the camera. Who is this guy? Is he a new regular or something? Maybe they're setting up a spin-off of the show, where this guy will go off after his job ends and try to make things up to everybody on his Karma list. I can see it now:

VOICEOVER: Boy, Karma keeps kickin' me in the pants. I'd thought I'd done pretty well at that last job I had, but to judge by the people who keep comin' up to me on the street and hockin' loogies on my shoes, I guess not. So after I ran into the hundredth woman who'd seen her son go off to war in some really hot and dusty country, or after I saw the fiftieth guy who'd lost his house when a really big storm hit that city down there where they make all that gumbo, I figured I had to do something to get back on Karma's good side. So I made myself a list, just like that guy Earl, of everything wrong I'd ever done. His list is a lot shorter than mine, though, but you can't cheat Karma! So I'm gonna start with Number #42 on my list: "Started a war on false pretenses against a non-threat of a country." My name is George!

I'll bet they could get a really long-lived series out of that premise.... 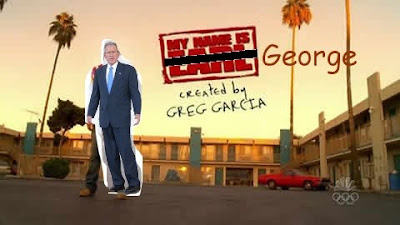 (Apologies for the crappy photo editing!)
scrawled here by Kelly Sedinger at 8:00 PM