Last week's entry turned out to be pretty easy, apparently: it is Uluru, otherwise known as Ayer's Rock, that really big, well, rock in the middle of the Australian Outback. Also, UI 52 was identified as the Cloud Gate sculpture in Chicago's Millennium Park. Several incorrect guesses thought it was a pool of water, but a careful look at the relections reveals that the surface of the object is convex and not flat, as a pool of water would be. Anyway, congrats to the winners!

And now for this week's entry: 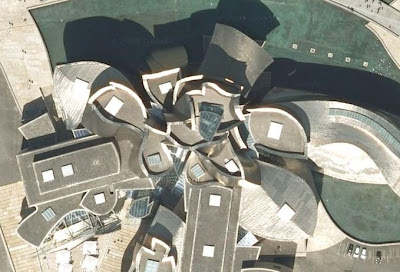 Where are we? Rot-13 your guesses, folks!
scrawled here by Kelly Sedinger at 9:51 AM

Heh. I get all the Chicago ones. And for once, because Chicago also has architecture by this architect and we got lots of hype about him when it was built, I am able to guess this one too. Thttraurvz Zhfrhz Ovyonb, Fcnva.

(Guess I'm not the first, since I see Ovyonb, Fcnva in the comment above too...)