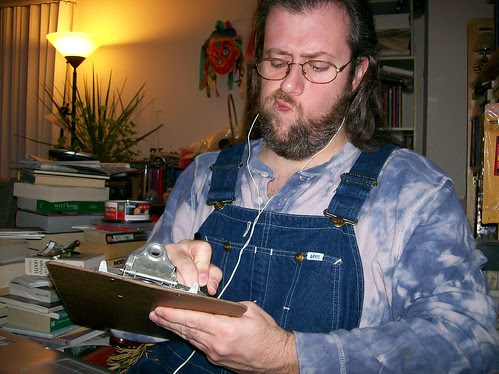 Can't tell a day from a knight without a program!, originally uploaded by Jaquandor.

This season is pretty gripping stuff already, but I'm wondering if the writers may have reached a boil too soon. It's getting really dense on this show, and one particular plotline -- the bit with the President's husband and his crusade to uncover his son's murderer -- is threatening to spin out of control a bit.

Anyway, I'm resorting to keeping notes now on what's going on. If this season runs true to form, the show will lose some steam between hours 9 and 14 (this year, roughly between 5 pm and 11 pm) before ramping it back up again toward the finale. From what I've read about how the writers work on 24 -- that they don't really plot it all out before they start -- that's generally when they reach the point where they don't know where they're going.

Oh, and Agent Walker is the prettiest FBI agent on teevee since Dana Scully.

These are cracking me up..

OK, just watched the first episode, and at the beginning I kept waiting for the senator to threaten to put his foot in Bauer's ass.